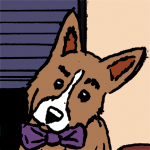 Just call him Boss. He’s the editor of the paper. While he is tough on his reporters, at heart he is fluffy and likeable. The boss has big ambitions for this paper. It has a proud history since it was founded by a corgi who fought in the Revolutionary War. Although subscriptions are down, he’s hopeful that investigative reporting and digital initiatives will pique interest. 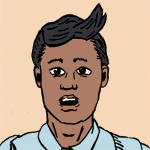 Joe is the new the White House Correspondent for the Hobarken Herald. He is completely unqualified for his job but no one wants to be in close proximity to the President of the United States. As the newest member of the bullpen, Joe is often stuck with extra duties. Often awkward, Joe is just trying to get through each day. 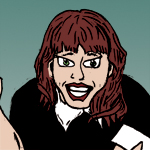 A Hobarken native, Mary is the paper’s investigative journalist. Although their best writer, her passion for a good story often interferes with her ability to show the appropriate amount of compassion or regard for her safety. Mary often writes from a feminist angle since she previously worked at a low-circulation feminist magazine called “The Monthly Rag.” 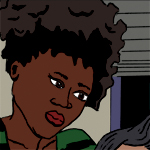 A native of Elmwood Park, Illinois, Kiara dreamed of moving to New York City. Unfortunately, living in Hobarken was a lot more affordable. The opinion writer at the paper, she hopes that one day the New York Times will notice her essays and poach her for their opinion page. She and Mary are friends who frequently find themselves in over their heads during their capers. 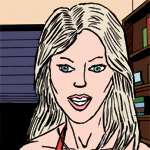 The eldest daughter of overpriced-hotel magnate, Conley Hellton, Kimber Boss (née Hellton) was quite the catch when she met the boss at a horse exhibition in Lexington, Kentucky. Though things were rocky at first. Mr. Hellton was wary of letting his daughter marry a democrat, and a dog one at that! However, given the boss’s impeccable breeding, that goes back to the American revolution, the Hellton patriarch was easily assuaged. Kimber spends her days on various committees and shopping, but she brings the boss his lunch every day. She likes to think of herself as the best thing that happens to everyone every day. 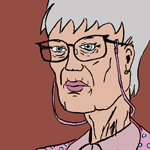 Alma Lumply is old. No one knows how old. She does copyediting and works on layouts with a bottle of rubber cement. She is at her desk when everyone arrives and is still there when they leave. If she is not at her desk she is looking for a new typewriter ribbon or a box of whiteout strips. 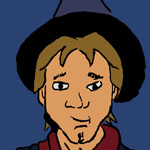 Sal is the Washington correspondent for The Daily Crier—a paper specializing in depressing news stories--the Hobarken Herald’s rival newspaper. Having worked in Washington for a number of years, he has cultivated a sense of ironic detachment. 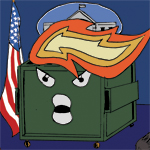 The newly elected President of the United States. He may be a sociopath. He also is a literal dumpster on fire. You may not like him but at least he can keep you warm?