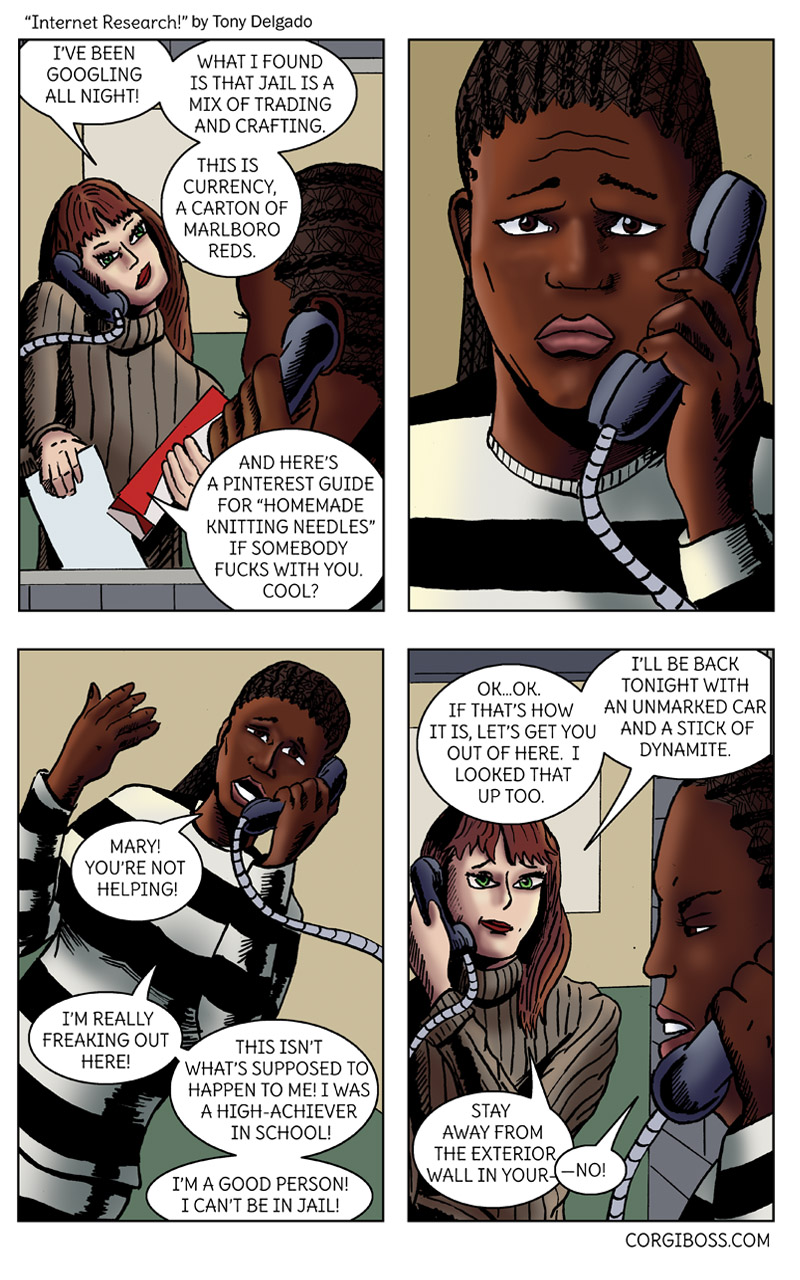 Opinion Page
Prison Chic: Pandora Jewelers to Release Handcuff and Leg Iron-Line with Charms for Each Felony
Posted December 28, 2017 at 12:01 am

Reminder: The holiday craziness—everyone’s mélange of joy, depression, regret, and self-affirmation—continues! So, please remember that next week there will be no update on Tuesday. I’m going to be away for the weekend for the New Year. I hope that you all will be having lots of fun this coming weekend as well. Normal updates will recommence with no foreseeable interruptions until the next big close everything and travel holiday (the 4th of July I guess?).

This strip reminds me that the funny thing about problems is that the people who often don’t suffer from them imagine them to be significantly simpler than they actually are. What I mean is that when someone suffers from a problem that is extremely complicated, there’s always that asshole who chimes in with a supposedly obvious, but superficial and useless solution. It’s like they think they’re the fucking kid from the story about the truck stuck under the bridge. If only everyone could see that they need to let the tires out of the truck! Going broke? Well, spend less! Israel and Palestine not getting along? Send Jared! Personal finance is much more complicated than people think. And Jared, although he looks like a handsome child-mannequin from Macy’s, can’t fix everything!

Look at Mary from our strip for instance. After a night of internet research Mary feels qualified to explain what it’s like to be in jail to poor Kiara. God help them all if Kiara had needed some minor medical advice and Mary had to look it up on WebMD. She’d probably be telling the poor woman that she has prostate cancer!

Sometimes rather than trying to present your obvious solution, maybe empathize when the problem is too hard to tackle. In the comic, Mary can’t fix Kiara’s situation (or can she?) so maybe she should just try to understand how Kiara feels. When a bad situation happens, sometimes it’s better to show the other person you get it, even when you don’t. This is like when my girlfriend waves the kitchen knife at me and tells me that I am driving her crazy (or as I call it date night). I know that is a problem that’s too hard to handle. I simply tell her that I sympathize with her situation and am sending my thoughts and prayers. Handled!

Trivia: Although Mary has never been to jail as an adult, she was arrested numerous times in her youth. The most recent was a #FreeTheNipple campaign she launched through the high school cheer squad.