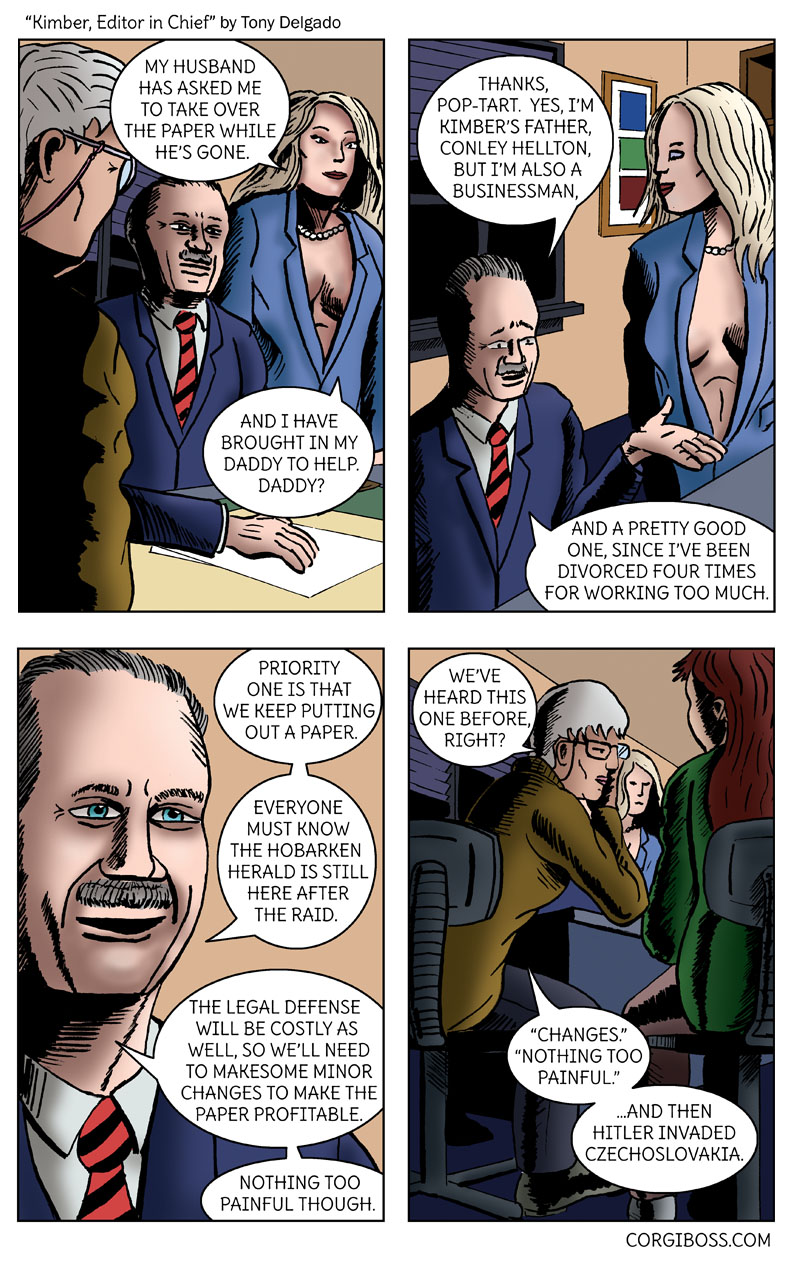 Opinion Page
Inevitable: Family Business Passes to Fredo of the Family.
Posted January 9, 2018 at 12:01 am

Although the boss asked Kimber to take over, I doubt he would have wanted her to don her “power suit” and bring her father in to run the business! Instead, he probably hoped that she could maintain things in the manner he had been doing it. Adding her dad into the mix complicates things. I mean, what happens when two family businesses collide (good tagline for a movie)?

The two business I am, of course, speaking of are Conley Hellton’s overpriced hotel business and the Hobarken Herald. Is this the start of a takeover? Normally, in-laws represent a kind of hostile takeover of your life, right? Suddenly, you may find yourself going to a bunch of family events for a family that is not yours. You have to acclimate yourself to hugs and kisses from people you may not have a very close relationship with. There are the hot button topics not to bring up. There’s the drunk uncle Steve who owns 58 guns “because he can.” Cousin Mary gets too drunk and hugs you just a bit too long. This is all very uncomfortable, but what happens when there are businesses involved? The boss could lose more than his stress free Memorial Day barbecues. Not to mention the politics of the situation. Don’t forget that the Herald is an enemy of the President of the United States. Since Kimber has brought her father in to run things, let’s hope that Conley’s presence is altruistic, or we may find that Alma’s skepticism is correct.

The interplay of family, family business, and politics certainly has its real-life analogs. We seem to be in a golden age of family government business. I mean, this past election came down to the choice, individual qualifications aside, between a former President’s wife or the current one’s entire family. Either way, the country knew that they were marrying into a complicated situation. That’s not all though. Remember, the primaries in which the brother of one President that was also the son of another was expected to be a party’s main candidate? Holy Cow.

On the one side, it really does pay off to be related to somebody powerful, right? However, the problem from the voter side is that, citizens really have to want to marry into an entire political family now. Maybe we don’t want Grandpa in charge because he seems kind of racist.

As Kimber and her father bring their family into the business of running a newspaper—a political endeavor given the events of this story arc and the previous one—we’ll have to see how they handle things. Will the Hellton’s and the Dumpster-Fires feud? Will the Bosses and Hellton see eye to eye on things at the paper? Above all, will Conley Hellton think, like everyone else, that Joe Flaco sucks? Let’s find out together.

Trivia: Conley Hellton has had enough failed marriages that his divorce lawyer keeps a punch-card with his name on it to earn a free divorce.