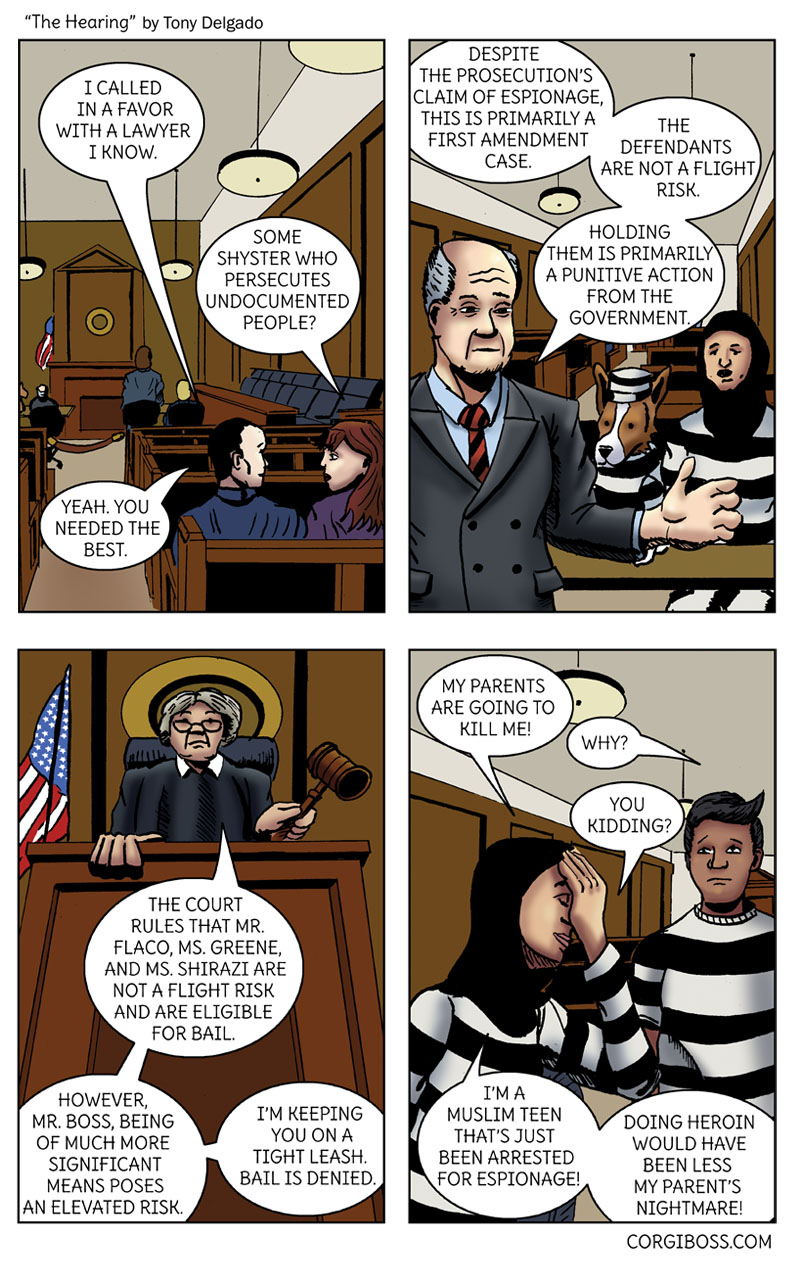 Opinion Page
Man Representing Himself in Court Convinced Habeas Corpus, In Flagrante Delicto, and Expecto Patronum Are All Legal Terms He Will Be Using
Posted January 23, 2018 at 12:01 am

I should also mention that out of all the strips in which I had no idea what I was talking about, this is perhaps the one in which I felt the most of out of my depth. I know what you’re going to say. “What!? You’ve never been on trial or to prison before? That’s surprising.” That’s what they say to me at my work all the time…for some reason. However, it’s true. I had to make up most of what happened in this strip because I’ve never been on trial for espionage. So, I thought I’d preempt any “Oh Actually” comments by addressing a couple of things which you may find are hampering your suspension of disbelief.

If there are any lawyers who are reading this, please forgive the invention from whole cloth of the particular circumstances of this bail hearing. Also, don’t you have a brief or something to prepare instead of reading webcomics all day? These aren’t billable hours, buddy! I doubt there are hearings about bail in espionage cases (for obvious reasons). Since the circumstances are very specific, I’m also sure the language used by the lawyer and judge would be different. Finally, since I’ve seen a lot of Judge Judy, I know that every judge berates someone during trials. Let’s pretend that the scene in which the judge tears into Joe Flaco will be included in the deleted scenes.

It’s a fact that black and white striped prison outfits are much funnier than the actual outfits you see at real trials. I focused-grouped that, so I refuse to apologize for that fictional indulgence. Now, I have to admit that this was not the most diverse or targeted focus group since it consisted of me, and me looking back in the mirror and smiling. Regardless, we’re both really enthusiastic about the comic.

However, my girlfriend noted, much to my chagrin “Joe looks pretty good in his prison outfit.” She also remarked that the prison clothes are surprisingly fitted. Now I would argue that baggy clothing looks dumpy in a drawing, but then I angrily remarked back, “They have many different sizes, damn it.”  I actually don’t know that though. Maybe prison outfits are just like free t-shirts you get at work: they just buy men’s extra-larges because it’s cheaper.

Anyway, if there are any other elements from the strip that seem inaccurate or hard to believe, try to remember that there’s a talking dog running a newspaper in this comic.

Trivia: Joe only spent a few days in jail, but he got three prison tattoos and joined the Latin Kings. Some may consider this an overreaction.