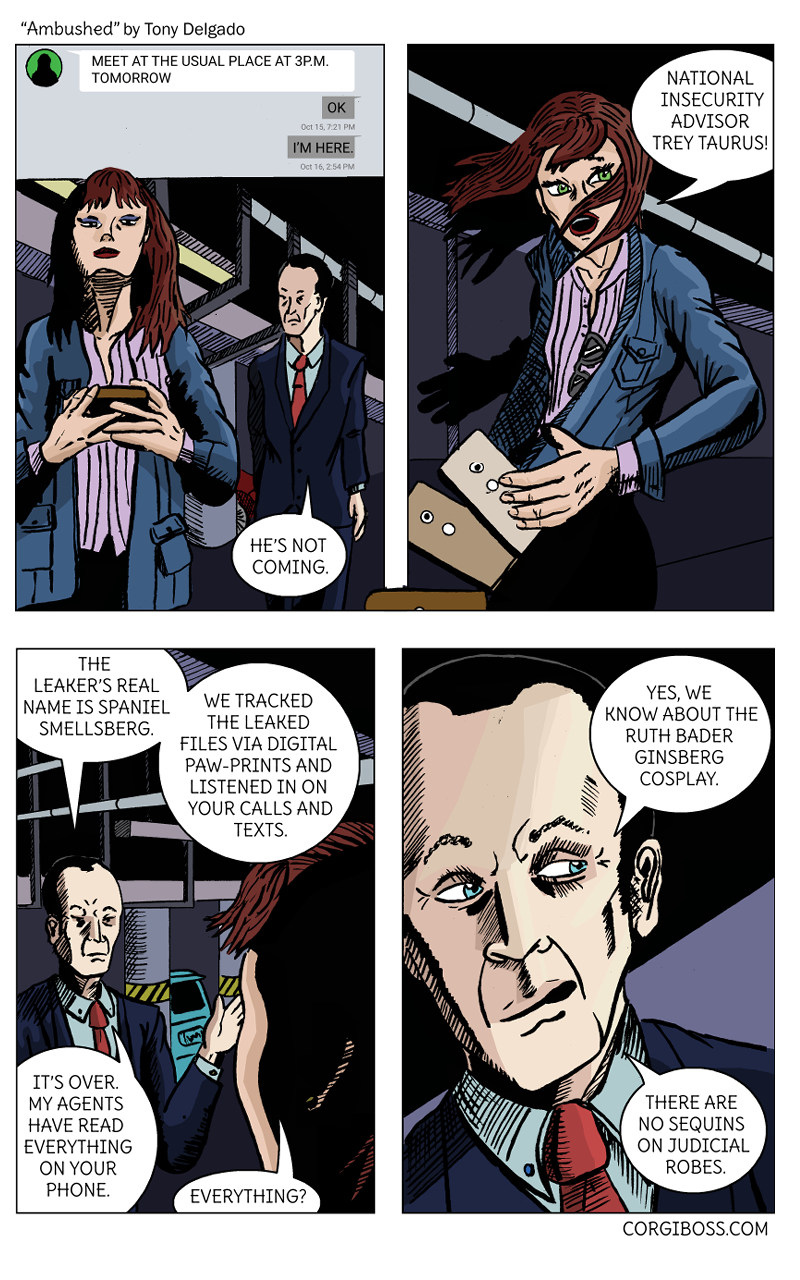 Opinion Page
Market Watch: Hot Anti-Social Advice App is Actually Just a Rock Spray-painted with the Word “No.”
Posted October 17, 2017 at 12:01 am

Unexpectedly running into people you know when you are out and about is the worst—even if you’re not running into your nemesis as Mary is in this comic. Fortunately, I’ve killed my nemeses and eaten their eyes to steal their power, so I only have to worry about strangers and friends. In Mary’s case, it means that Trey Taurus, and therefore President Dumpster-Fire, know what how the Hobarken Herald has been getting their scoops. In terms of the story, it signals that they have lost control of the situation. In real life, my distaste for running into people is probably about controlling the narrative as well.

When I go out, I usually put my earbuds in and try to avoid eye contact with everyone except cute dogs. Although I have to go out for food, clothing, and shelter, I won’t be distracted by other humans. I used to only put one earbud in so I could hear a car coming up on me, but then I decided I would rather die via vehicular manslaughter than have to talk to another person that I hadn’t planned on encountering that day. This is because I become focused like a laser on doing the things I’ve mentally prepared myself to do and that’s it. I’m like a millennial Benji Compson making sure I go around the statue on the correct side.

One of the reasons I was most glad to move away from the Midwest was because random people would try and talk to you in public. This and the fact that some Midwesterners think gay people would want their wedding catered by a pizza parlor. No one wants pizza for their wedding. Anyway, while waiting in line (or “on line” for you New Yorkers) at the store, from the other customers you get “Nice weather.” I don’t know what the weather is. I’m not looking up for anybody, buddy! I’m not ready for this type of thing. I went to self-checkout because I didn’t know what to tell the clerk when he asked “how are you doing?”

It’s worse when it’s a person you know. Now, you have to stop and talk to them because if you don’t you get, “I saw you the other day. You didn’t say hi.” Perhaps that part of my day was not about you. I have important things I do like running to the corner grocer to buy fig newtons to eat by the whole sleeve. At the risk of making this my most Andy Rooney blog post, maybe we should make it a rule not to say hi to each other. You never know the other person might be an introvert. If you see me, and I see you and then hide behind the fronds of a large potted plant, just know it’s not personal. I just hate running into you.

Trivia: Joe started dating his ex-girlfriend, Angie, after they ran into each other at a local blood bank. He was donating blood and she was bathing in it.