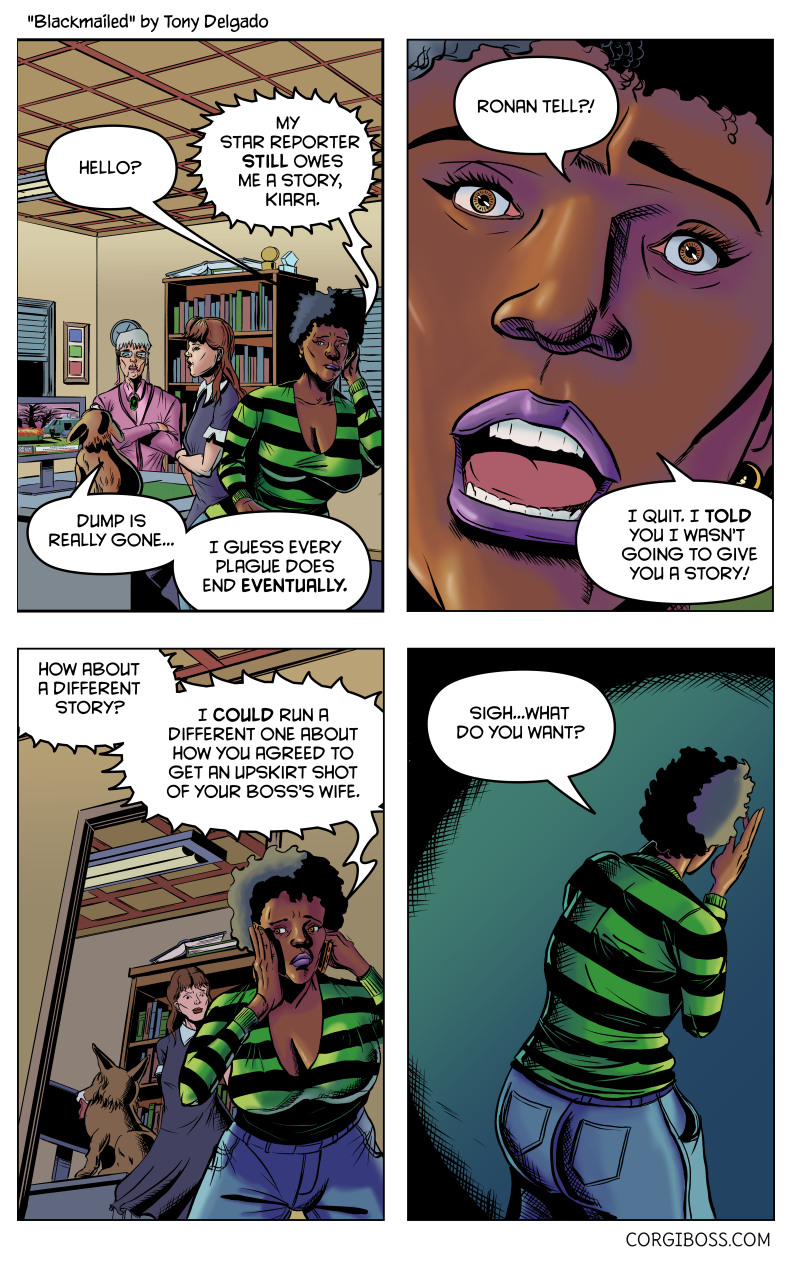 HOBARKEN (Corgi Press) — This is the 200th strip that I’ve made for Corgi Boss! It’s nice to hit this milestone. Looking back, I’ve made a lot of improvements in my art and writing since the beginning, and it really shows.  Nonetheless, it doesn’t feel any less laborious. :-/ Someday, it will get easier!

Concerning the writing, it’s often said that the way you show love to your characters is that you make their lives difficult. That’s something I’ve certainly tried to do in this strip. Poor Kiara seems so twisted up about what Ronan Tell has on her. Right now, things are not looking so good for her.

This strip milestone also makes me feel a bit nervous as well as thrilled because my original plan was to do 300 strips before wrapping up Corgi Boss. I guess I should start thinking about an ending, huh? Perhaps, I’ll think of an alienating twist like the producers of Game of Thrones! Joe Flaco gets Manchurian Candidated or the cast reconvenes in an afterlife Ying-Yang church! Who knows!

I watched the Oscars on Sunday night, and no, I don’t have anything to add to the discourse around the smack heard round the world. However, I will comment that I nonetheless enjoyed this year’s show more than last year’s experience in public awkwardness and depression. The producers made the right choice in making Best Picture, the most important award, the last one of the evening. Duh. However, I was not a fan of the sidelining of more of the awards to outside the broadcast. I thought it was pretty ill-considered to have Samuel L. Jackson’s lifetime achievement award not be part of the show—a motherfucking lifetime achievement award. I just think that if ever there were an award to include in the broadcast, it would be the award that you can only get once in your entire life.

CODA was a good movie to choose for the big award, but I don’t necessarily think it was the best this rather mediocre film year had to offer per se. However, it was certainly the one that felt the best to watch, which maybe is what we needed after being battered for multiple years by…well…everything. So, I’m OK with it winning rather than a meditation on grief and art (Drive My Car) or the exploration of the perversion that comes from self-loathing (The Power of the Dog).

I’ll be back with my meditation on anxiety and helplessness next week! See you then!