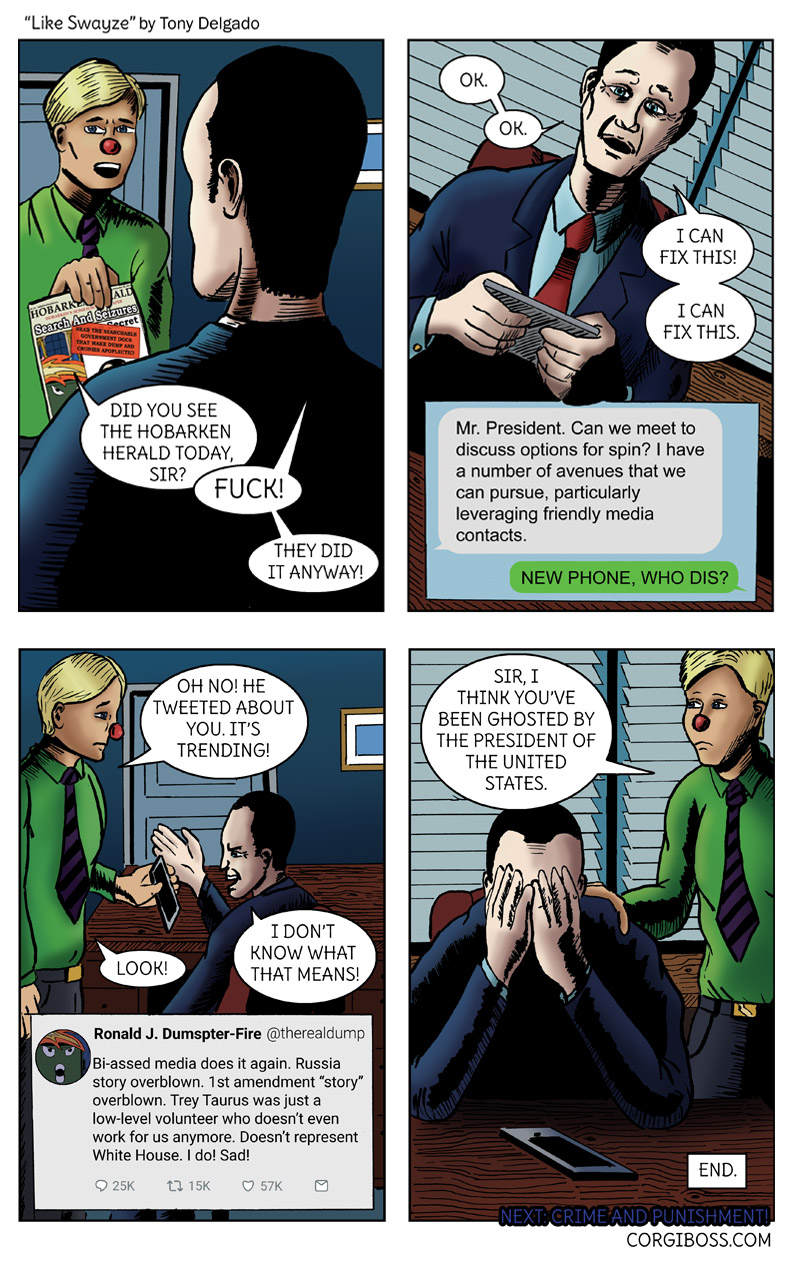 So, that’s the end of the first Corgi Boss story arc! Hopefully you’ve enjoyed reading it as much as I have enjoyed making it. Actually, I hope you enjoyed it more than that because there were some days that I was like, “Ugh…so tired, but must keep drawing.” That said, it’s a nice feeling to hit a milestone, and I think it’s a good idea to just pause and take a moment to feel some pride. *silence* OK! Now we can move on to the next thing.

Regarding the next story, it will pick up where this one left off, but I think that you’ll find that I’m going to shake things up a little bit for the crew at the Hobarken Herald. I don’t want to give too much away by offering you a preview. Instead, I thought I might treat you to some of the ideas that I’ve rejected for the next story arc. Enjoy!

Pup Reporter: Joe is run down in the street by an ice cream truck, his screams drowned out by the truck’s tinny speaker playing “The Entertainer.” As Joe’s soul descends toward hell, some unfinished business stops him, and he discovers himself reincarnated as a puppy. Everyone likes him better.

I Am Curious (Old): After an argument about setting the time on a VCR, Kiara is convinced that Alma doesn’t like her for some unknown reason. Fortunately, her uncle happens to be a disgraced nuclear scientist who has a machine that can turn Kiara into an old, so she can understand why Alma is so cranky. Once Kiara is old, Waldorf and Statler style comedy ensues.

Big Bunch of Cheeseburgers Day: President Dumpster-Fire hosts the White House’s “Big Bunch of Cheeseburgers Day.” It’s a day in which anyone except Joe Flaco can come to White House and petition the President on an issue. It started when a past President with no friends and a lot of cheeseburgers invited anyone to come eat there for free. They do it now in the spirit of openness and transparency. As each lobbyist asks for help, Dump tells him that he’s already solved their problem better than they could have hoped. He then eats all the cheeseburgers.

So, those were some ideas that came close to going into production. Don’t worry though. What I went with is so much better.

Trivia: Soraya AKA the Hawk is a real go-getter. In addition to being a photographer for the Herald, she is also the class president of her high school.  Not too remarkable until you realize she’s in college. After she got the presidency via coup d’état, she declared herself president for life.