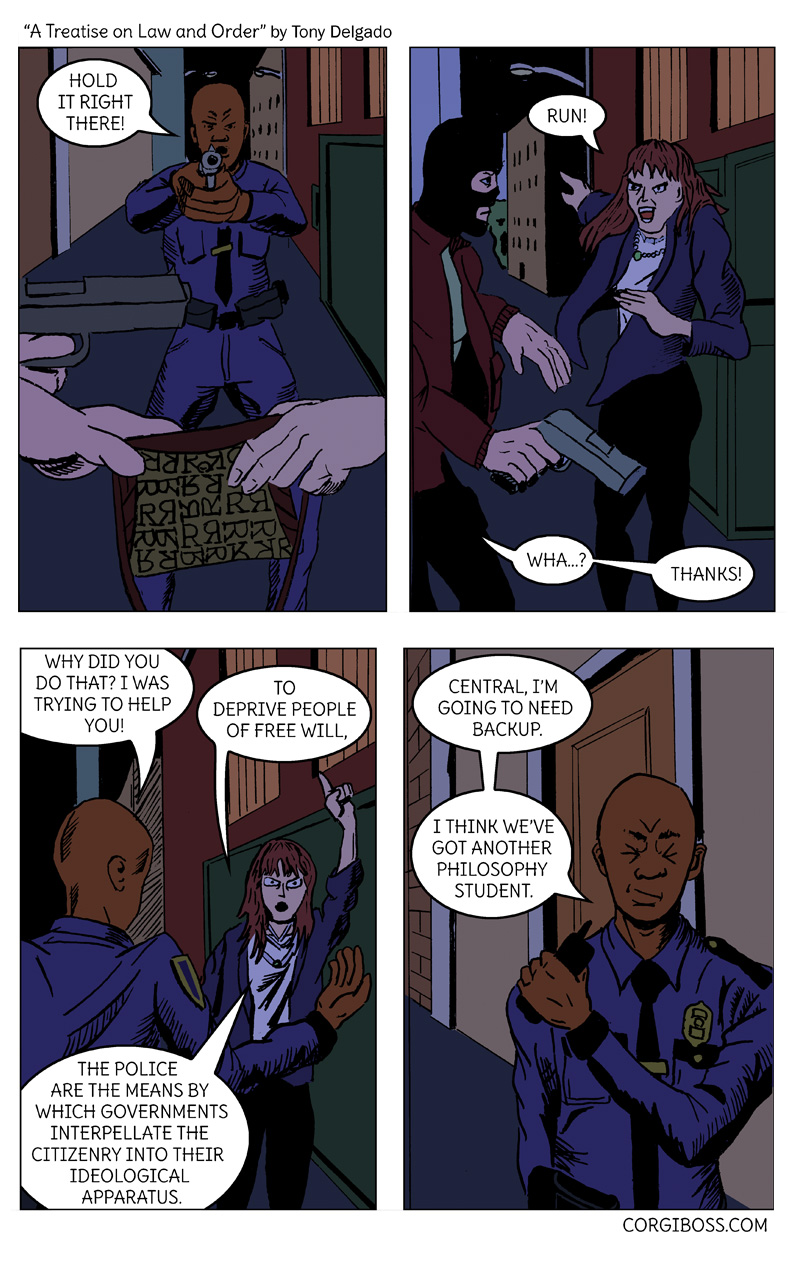 Opinion Page
How to Put Some Philosophical Practices into Your Real Life
Posted August 1, 2017 at 12:01 am

Mary helped the robber get away? Wha? I guess this strip illustrates the difference between theory and practice. When you read philosophy, you learn how the world works. You gain a greater sense of reality by losing touch with reality. Part of this is seeing everything around you as part of large social structures. Another part is questioning the given reasons how something—like the police—function in our society. The best part of philosophy is tying everyone’s actions to their penis (or lack thereof) and a desire to fuck their parents.

Mary’s giving you some of the philosophy of this French Marxist named Althusser. He’s basically the smartest philosopher who ever strangled his wife in a fit of temporary insanity that I know of. Being a Marxist, he has to wonder why the people haven’t realized they need a revolution. I mean come on…wake up, sheeple as Althusser used to say to his colleagues at the École Normale Supérieure, an elite French university.

Althusser theorized, probably while smoking a lot of cigarettes, that it was not law or the force of the military that made people believe a nation’s ideology, but instead the social structures that make us who we are—our parents, schools, churches—that cause us to live under a government’s power without revolt.

So, when it comes to the police, it’s not necessarily the gun that they carry, but the fact that collectively everyone believes they have authority over us. According to Althusser, when people acknowledge the police almost reflexively, it’s too late, they’re already a believer. Pretty crazy, right? It’s like a Christopher Nolan movie!!

How to Be Right in Principle but Safe in Practice

So, Mary’s not wrong in theory. However, it’s in practice that she really makes the wrong choice. How do we avoid doing that? Obviously, when you’re being mugged is not the time to take a stand against the police state. Philosophically, she may be right in principle, but is she any safer?

That’s why rather than pyrrhic stands, I practice a philosophy of pragmatism in which I find the problems of society and diagram them. Then I come up with ways in which structural apparatuses have made these symptoms. From there, I look at what sorts of policy levers can be pulled and who needs to be contacted to do so. At that point, it’s about influencing policymakers. The change takes a long time, years, but eventually the world becomes a better place.

Just kidding. I just sit down in front of a computer with a baguette in honor of Althusser and bitch on Twitter, then go back to real world.

Trivia: In college, Mary was a member of a radical leftist group that did reenactments of My Dinner with Andre.