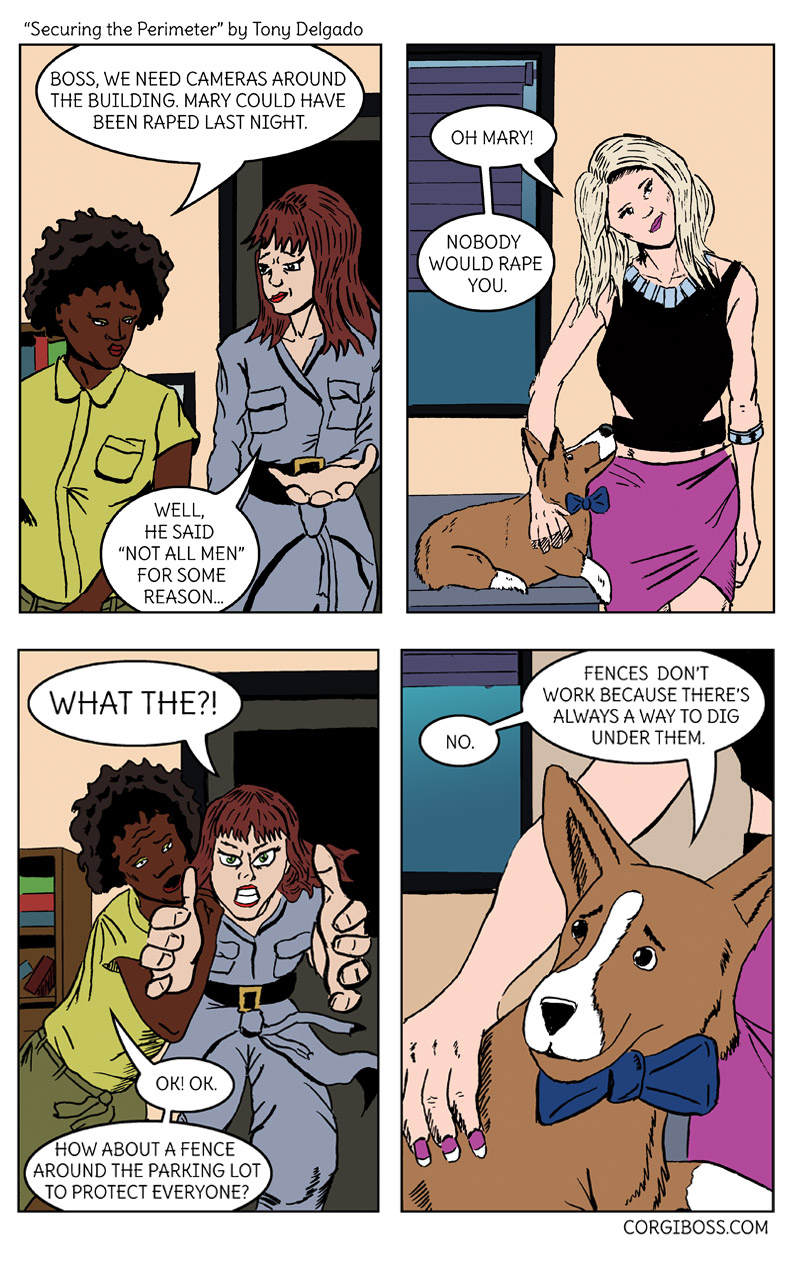 This comic comes the week after McCain’s dramatic 1 a.m. nay vote in the Senate, killing the latest iteration of Obamacare repeal. Perhaps more importantly, like the hoary-haired Senator from Arizona, we see the boss vetoing the idea of having a fence around the Hobarken Herald’s parking lot. This all reminds me how they used to describe the Senator as a maverick (before Palin’s hokey salesmanship ruined the term). I bring this up because I see the boss as a bit of maverick. As in this comic, when you come at life from a dog’s perspective you can surprise people! The boss is a free thinker who has always done other things than what people expect. For example, he’s creating a web presence and blog for his paper to disrupt the traditional media landscape, which we know other papers haven’t done, right? I like to think it’s his maverick qualities, rather than his fluffy and cute qualities, that make him so popular.

Is It Good to Be a Maverick?

A value that is particularly favored in the United States is individualism. This leads to our love of mavericks. We made an old tv show called Maverick, that eventually was made into a shitty movie. There also was that 80’s movie about the pilot named Maverick coming to grips with his own sexuality. Based on only these three loosely related examples, anyone can see it’s central to American culture. We seek out people who are completely different from everyone else, because that’s attractive, and then we and everyone else all become like them.

Also, if you’re not parroting what everyone else is saying, and you can look good doing it, then you can seem a lot of smarter than you are. That’s because everyone is deeply neurotic and will automatically wonder things like “Does she know something that I don’t” or “I know they said not to drink mercury but he does and his teeth are soooo white.”

However, the downside is that you’ll never know what these mavericks will actually do. It’s a very exciting narrative, but can give you agita if you have to live through it. When it comes to important decisions, we usually want sameness. If it’s good for us (like McCain’s vote), then we’ll praise them, but if it’s not for us, then we’ll deride them as crazy. McCain saved healthcare last week, but he also had Sarah Palin as a running mate. The things that makes moments like the McCain vote so suspenseful is that you never know what the maverick is going to do. It’s exciting, but wouldn’t it have been less stress-inducing if we knew his vote beforehand?

Here’s another example: imagine yourself boarding an airplane bound for Los Angeles. You double-check with the gate attendant if this in fact the correct plane for L.A. To this, she responds, “It is scheduled that way, but the pilot fancies himself a bit of maverick. He’s been known to fly to Detroit for reasons he only knows!” You’ll probably switch airlines.

Next Corgi Boss update will be…at the usual time because I’m not a maverick I guess. See you Thursday!

Trivia: One of the boss’s ancestors began to put a Sunday supplement in the Hobarken Herald to make it thicker, thus making it impossible to roll up, an act which he found personally offensive!