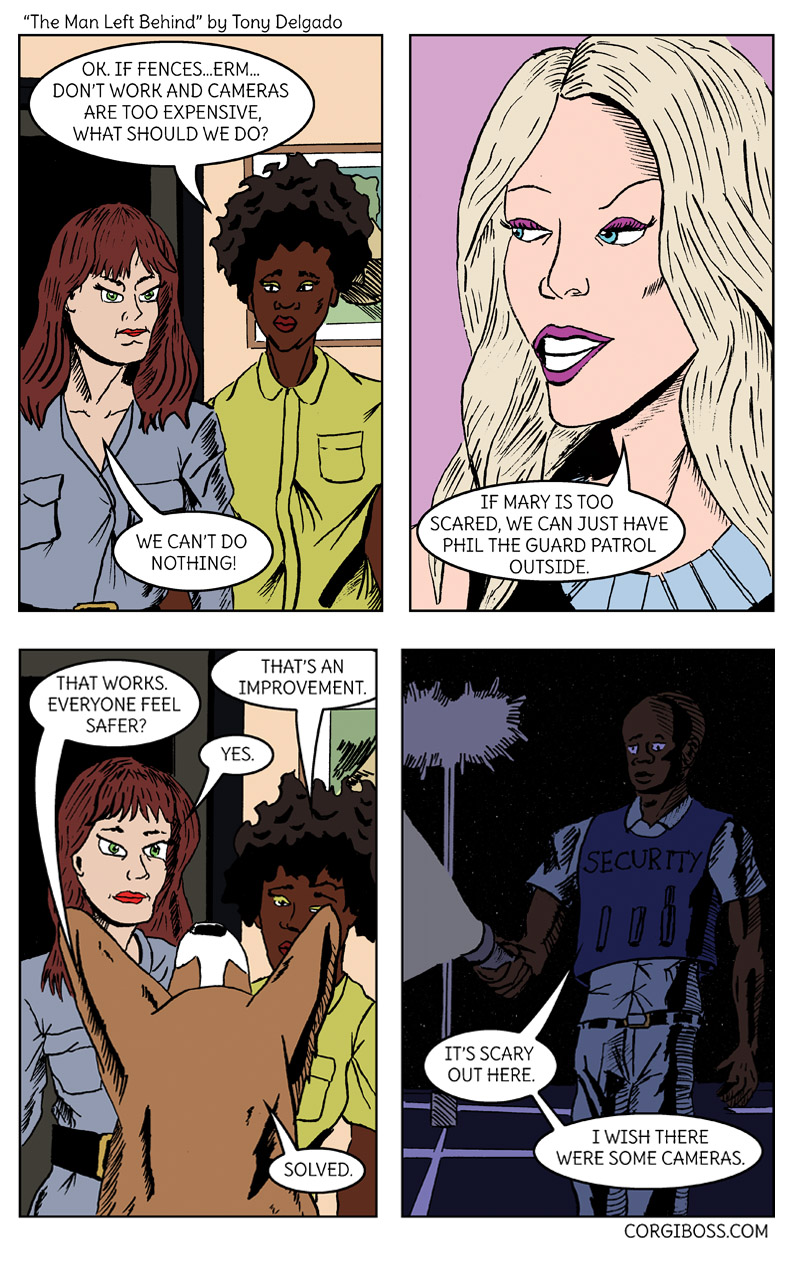 Since kindergarten, we have always lived under this illusion that we can rule by consensus. There, overbearing teachers, who wouldn’t let me just build the Lincoln Log fort that I wanted to make, encouraged me to ask other children what kind of fort they wanted, so they could compromise my grand design. I mean, like Melvin Slutsky knew the first fucking thing about building forts? That philistine couldn’t even tie his damn shoes! Anyway. It’s an illusion that still pervades our lives as adults. Even Congress talks about it all the time and look how bad they are. It’s at work with Kiara in this webcomic. She really is trying to work out a solution that benefits everyone, but as is always the case, someone gets screwed over. In this case, Phil the poor security guard.

This is the problem of design by committee, and after global warming, it’s one of the biggest problems we have today. As they say at Le Cordon Bleu in Paris (this is an authentic and true fact. Trust me.) “Too many cooks spoil the broth.” This glib truism has never been truer. The idea that we can all put our heads together and be satisfied is an illusion and the worst kind. Someone will always be left out like poor Phil.

It’s like when Mike from HR (how’d he get that job anyway?) shows up with t-shirts to office teambuilding day. You better believe every one of those free shirts (and free shirts are one of the major ways I dress myself) are a men’s extra-large. Why? Because extra-large will fit almost everyone. However, what about poor Susie? She’s very small (so much so that it was very amusing when she climbed into the office fridge that one time), so these shirts aren’t going to stay up when she wears one. She’ll probably just slide out the neck hole.

So, what’s the lesson of this webcomic? We could take the time to find out what everyone wants and rely on expertise to make our group decision, but that’s too hard. Instead, the easiest way to account for everyone is to not focus on a consensus that satisfies everyone. Not everyone will get what they want. Instead focus on giving everyone something they can actually agree on: what they don’t want. When your friend asks, “I’m getting pizza, what does everyone want?” turn to her confidently and say, “So we don’t exclude anyone, how about we instead focus on what everyone doesn’t want?” That way everyone will be included and know how I felt when I didn’t get to build the fort I wanted.

Trivia: The Hobarken Herald used to be run by an executive board until the boss consolidated it through trial by corgi Wizengamot, a little-known bylaw.