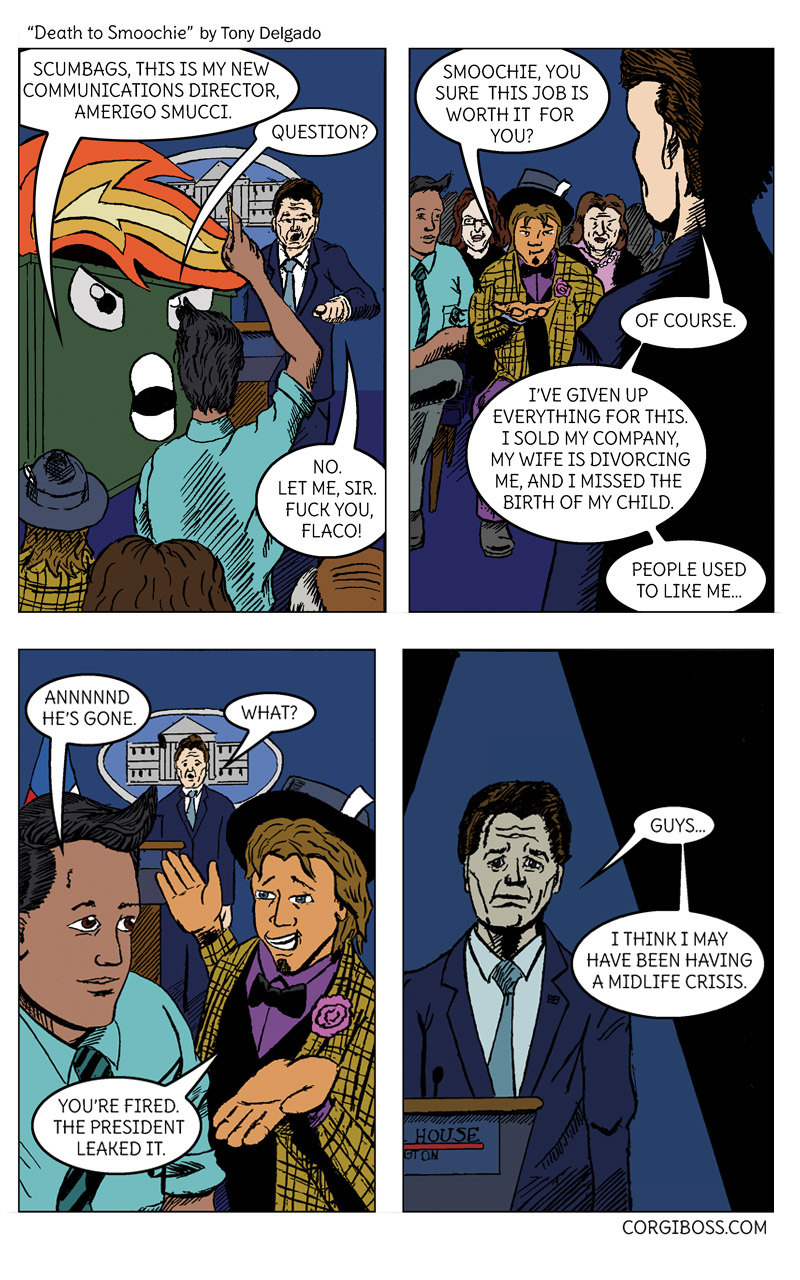 The webcomic for today was originally going to be something else, but when the recent news with Scaramucci broke, I felt I had to respond to it. I was seeing a disgustingly awful amount of sanctimony being sprinkled around Twitter, and people were indignant to the notion that a 52-year-old man blowing his life up could in addition to some sort of karmic justice also be rather sad. So, I thought I would explore that a bit.

For those that haven’t been following the news–we’re all jealous. You must really enjoy your life right now. Here’s a recap: New York financier Scaramucci basically went all in with the Trump train.  To take the job he had for ten days, he sold his company, and no doubt alienated so many of his friends. He also alienated his wife, who filed divorce while being nine months pregnant. Then he missed the birth of his child. He gave a very profane and unprofessional interview to the New Yorker in which he alleged White House strategist Steve Bannon was trying to “suck his own cock.”

It sounded a lot like a book my girlfriend recommended to me called, Appointment in Samarra. I told her I’d read it, but I haven’t because I like to keep her guessing. In the book as my girlfriend tells me, a well-to-do guy basically self-destructs for no apparent reason. If that sounds interesting, you should check that book out. Don’t take my word for it, though!

A Clown Car That is Unsafe at Any Speed

Finally, the weird thing about the Trump White House is how, despite how they are trying to fuck over large swaths (or swatches in Trump-speak) of the country, they’re all a bunch of clowns. You just get the idea that these m/billionaires are completely out of their depth. It’s strangely humanizing. I say strange because every news day is like being stabbed in the eye by some monster. You’d think I wouldn’t find humanity in that, but I do.  Underneath all the hate, they’re running around in circles spraying each other with fake flowers, falling down, and smacking each other on the ass without any sort of coherent narrative.

Like real clowns, they can be kind of funny because they’re so inept. They can also be kind of sad because you feel, as with a hobo clown, you can see the sadness behind the makeup. This brings to mind the time Spicey didn’t get to meet the Pope. Lastly, like clowns they’re a kind of creepy as well. You’d never truly leave them alone with your kids, or put them in charge of anything. That’d be crazy. I mean. they’re clowns after all.