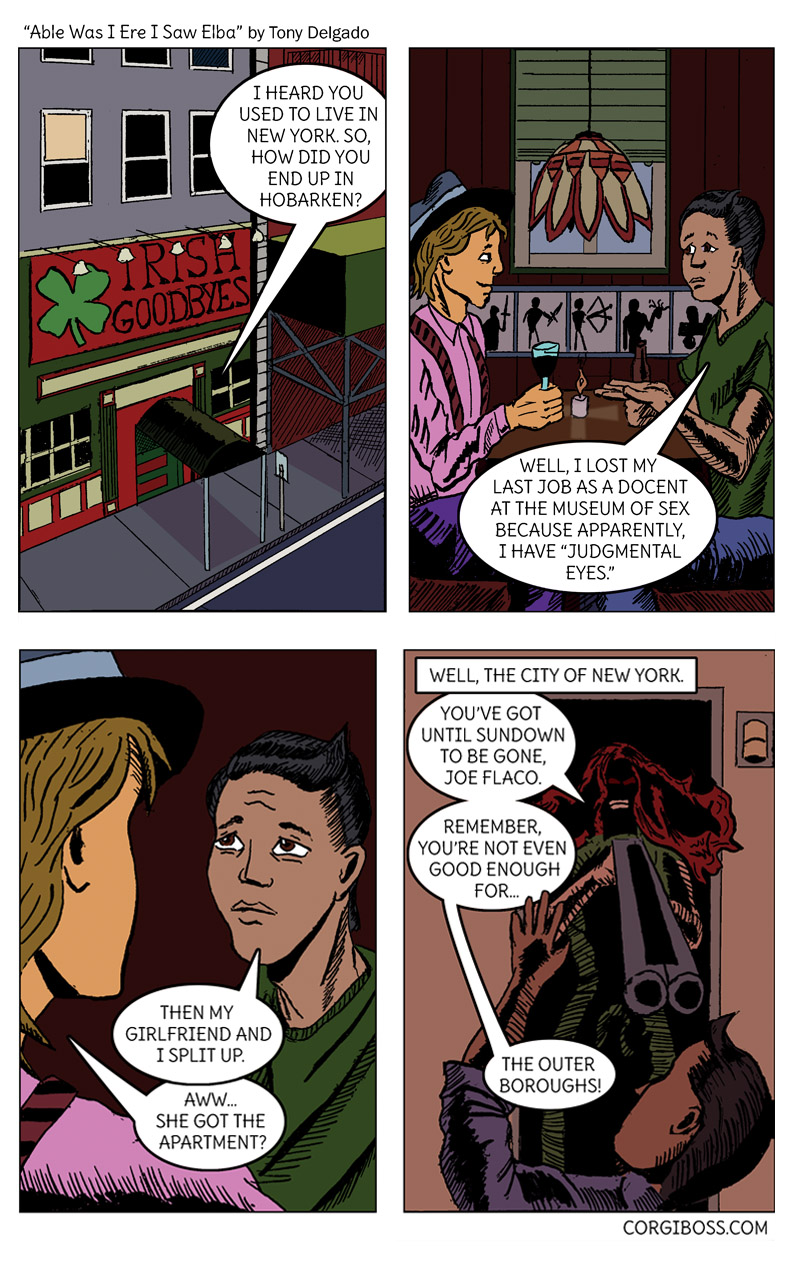 Opinion Page
“That’s Why He Did That” Man Exclaims After Reading “Early Life” Section of Wikipedia Article.
Posted August 17, 2017 at 12:01 am

So begins what I’d like to refer to as the “Secret Origins of Joe Flaco.” Were Corgi Boss a superhero comic, the contents of this strip would be the first act of an entire film. The plot would follow how young Flaco became a reporter for the Hobarken Herald. You could go see it in 2D for $12 or 3D IMAX for one month’s salary. If people liked the movie, it would make a billion dollars and then a few years from now, they’d start over and tell this origin story again. For whatever reason, Hollywood has an obsession with origins. The funny thing is that when I was reading comics as a wee lad, origin stories were just an intermission into the contemporary time period of the comic. Sometimes, they’d be an extra issue (Issue #0) that you could buy separately…or not. Now they seem to be the be all of every narrative. Imagine my shock to discover that they’ve made a movie about the origin of Leatherface, the villain from the Texas Chainsaw Massacre movies!

The Pleasures of Voyeuristic Analysts

Now, the cynic may say, “Hold on there! That Leatherface origin movie is just a money grab and they needed to make something.” This hypothetical cynic may not get invited to parties very much because he’s such a downer, but he’s not completely wrong. Yes, it’s a money grab. However, the way they trap that money (as the hip hops would say) is that they tap into everyone’s inner-Freud. That’s the key point. And yes, you’ve got an inner-Freud. We don’t much like Sigmund nowadays, but he still affects us. As a teacher once told me, even if you have not read Freud, you understand his theories (was that double-entendre? Should I be insulted?). My point is that he has inculcated in all of us a curiosity about origins. Everything for him originates from development and we’ve all internalized that notion. We’re like, I’d like to see how this guy got so fucked up. Did he want to sleep with his mother? Does he have some outlandish fetish? Penis envy? Let’s see what weird, perverted, or traumatic thing made this person that way. So, we go see the movie or we buy the secret origin comic because we like dirty secrets. Anyway, this strip starts a short origin of Joe’s start at the Hobarken Herald. Enjoy it, you perverts.

Trivia: Alma, who does copyediting and layouts for the Hobarken Herald, has no origin story. She is so old that she predates origins. Amazing, right?