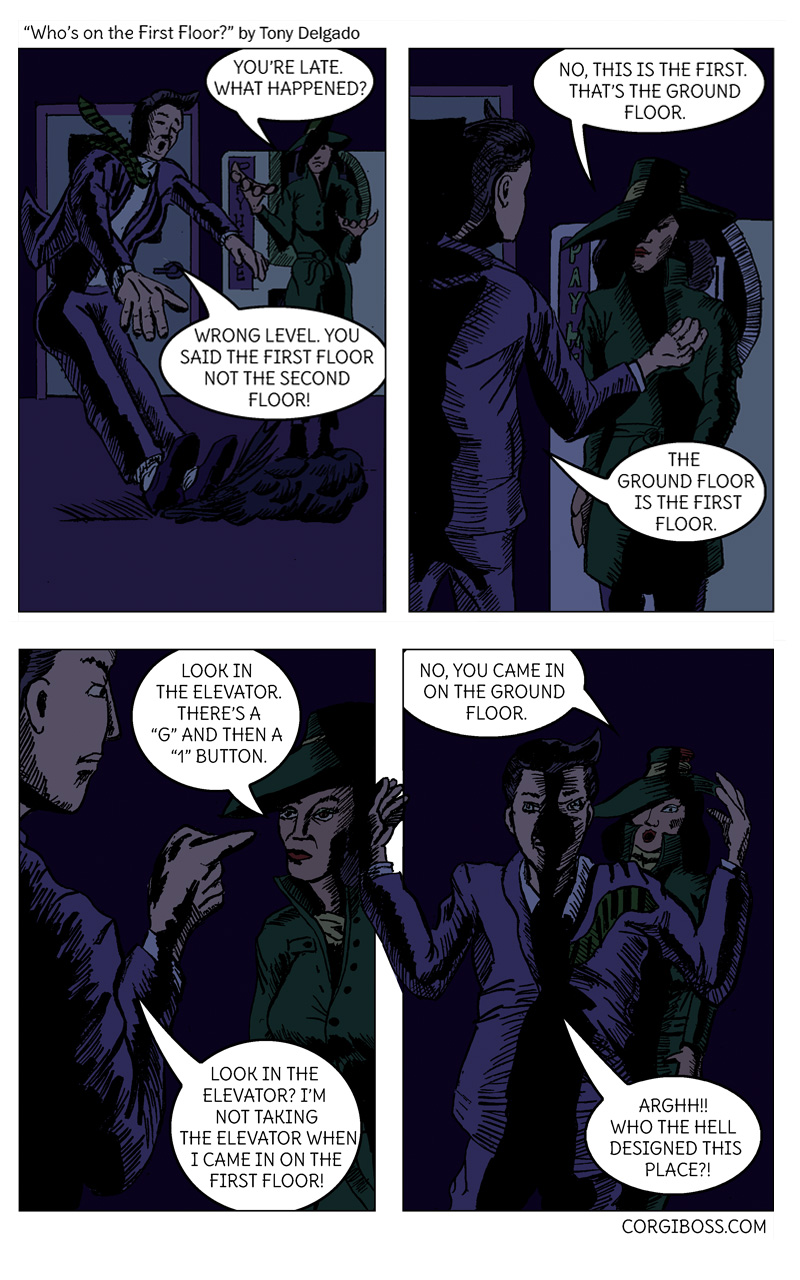 Joe’s parking garage troubles continue. He seems to be going through a version of this Abbot and Costello classic routine. Just wait until he discovers he lost his parking garage ticket. Regarding the comedy routine though, I’ve got to admit that I have a particular fondness for it. I even remember enjoying another version when the Animaniacs did it. Watching the original over and over as Lou Costello becomes increasingly apoplectic as he just tried to have a simple conversation with Abbott, it becomes a little transcendent. What if it is a metaphor for life? …Maybe not.

However, it does feel a bit like it fits for the talking heads media culture we have now. Even when segments become viral like this latest one (Note: don’t read the YouTube comments, ever), I feel as if I am just watching people chase each other without meaning. It’s not that the news shows don’t bring up serious issues from time to time. It’s just the little games of rhetoric and logic become a little tiring. I mean, if I’m going to watch people yelling at each other for 20 minutes, at least make it amusing to me.

I don’t know, maybe it would be better if we had Abbott and Costello in boxes on CNN. I mean these Alt-Reich types do have funny names nowadays. You know that, right? We’ve got Who’s a Nazi, What’s a white supremacist, and I Don’t Know’s a “Nationalist.”

The Identity of the Source

For those with a keen eye, I must disclaim for legal reasons that Joe’s super-secret source bears no resemblance whatsoever to the popular children’s character Carmen Sandiego. In fact, her name is quite different. The name of Joe’s source is Miranda Los Angeles. Rather than run a criminal organization, Miranda actually works for UNICEF. Now, don’t you feel bad for thinking otherwise?

But, Carmen Sandiego, right? She’s pretty cool, and she’s getting a new series in 2019. I recently discovered that she was originally voiced by Rita Moreno (and now Gina Rodriguez), which I think makes the character Puerto Rican, like me. On the whole, I have mixed feelings about it though. It’s cool to not only have a Puerto Rican children’s character, but the title character! On the other hand, why does she have to be defined by being exceptional at stealing? Seems…kinda…racist.

I’ll watch it though. I guess I don’t care. Give me whatever you got, media! A talented thief or a second-place Spider-man, I’ll take it!

Trivia: The boss was once invited on a talking heads news show. They cut his mic because he, according to them, “kept barking his answers at the other guests.” What do you think that means?