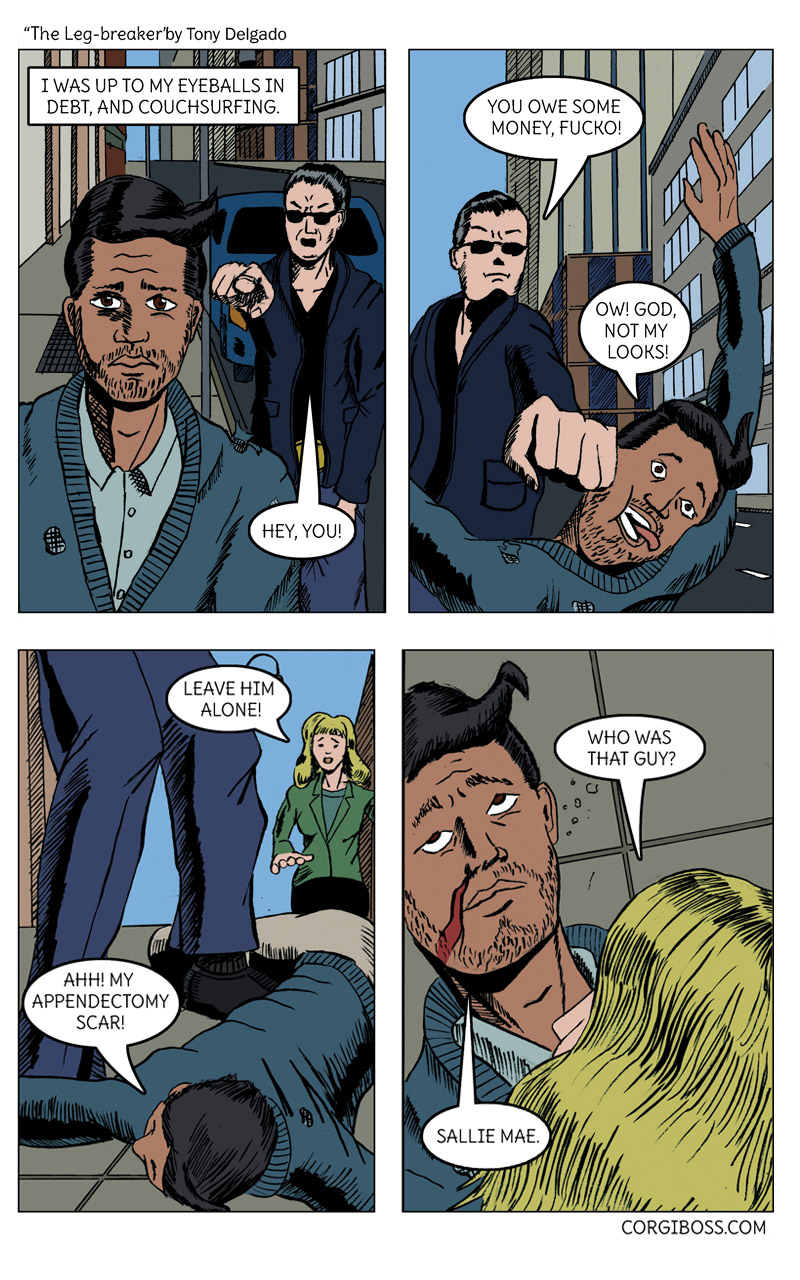 Here’s some action for you! Pow! Zonk! I love comics that have exciting fight scenes. I had once toyed with the idea of having one of the Hobarken Herald’s employees moonlight as a costumed crimefighter, but given Joe’s performance in this fight… Well, you can see that he does not have much of a future fighting crime…or debt. ‘

Regarding debt, I think the idea of the leg-breaker enforcing the repayment of loans is a bit of an antiquated notion that lingers in old movies. Don’t forget that Rocky Balboa starts as a leg-breaker in the first movie. You know, before he fought Mr. T and saved America from the Russians.

Now we don’t need leg-breakers because we have a debt-based economy! In the old days, you’d be like, “That guy has a gambling problem. He keeps taking money out from that loan shark!” These were usually characters in movies and books that didn’t do well. They’d have their fingers broken, be forced to leave town, or—if the debt was large enough—they would be murdered. Lately, we’ve changed our tune regarding excessive debt. We’re like “You don’t want any debt? What’s your problem, weirdo? Don’t you want to go to college?”

However, I’d like to suggest that the antiquated loan shark and the leg-breaker is a truly utopian idea. Yes, they are often villainous characters in movies and we don’t like being the victims of violence. Unless, you get off on that, you pervert. However, what if that violence is the better alternative?

Think of your student loans. You’ll be paying those off for at least the next ten years. They don’t break your legs, but they will garnish your wages and ruin your chances of ever getting a nice house or car. Also, every few years Congress makes it harder to get loan forgiveness. In fact, I think Sallie Mae is changing their slogan to “The mob will forgive you before we do.” You may think about getting your education, buying a house, having some kids, and then killing yourself to escape the debt once the kids leave the nest—the American dream. However, you could be wrong if you don’t have federal loans. After death, those private loans could automatically default and require immediate payment from your family!

A better option would be to go to a more…erm…private loan officer that deals strictly in cash. Pay for college and repay it if you can. If you can’t, pay it back by having your hands broken. You didn’t want to be a pianist anyway, right? Plus, with free health care, why worry about a little debt and some broken bones. …oh wait.

Trivia: During the prohibition era, the Hobarken Herald incurred excessive debt from payroll and operating costs. To cope with this, the boss’s ancestor ran a number of barkeasies throughout the city.