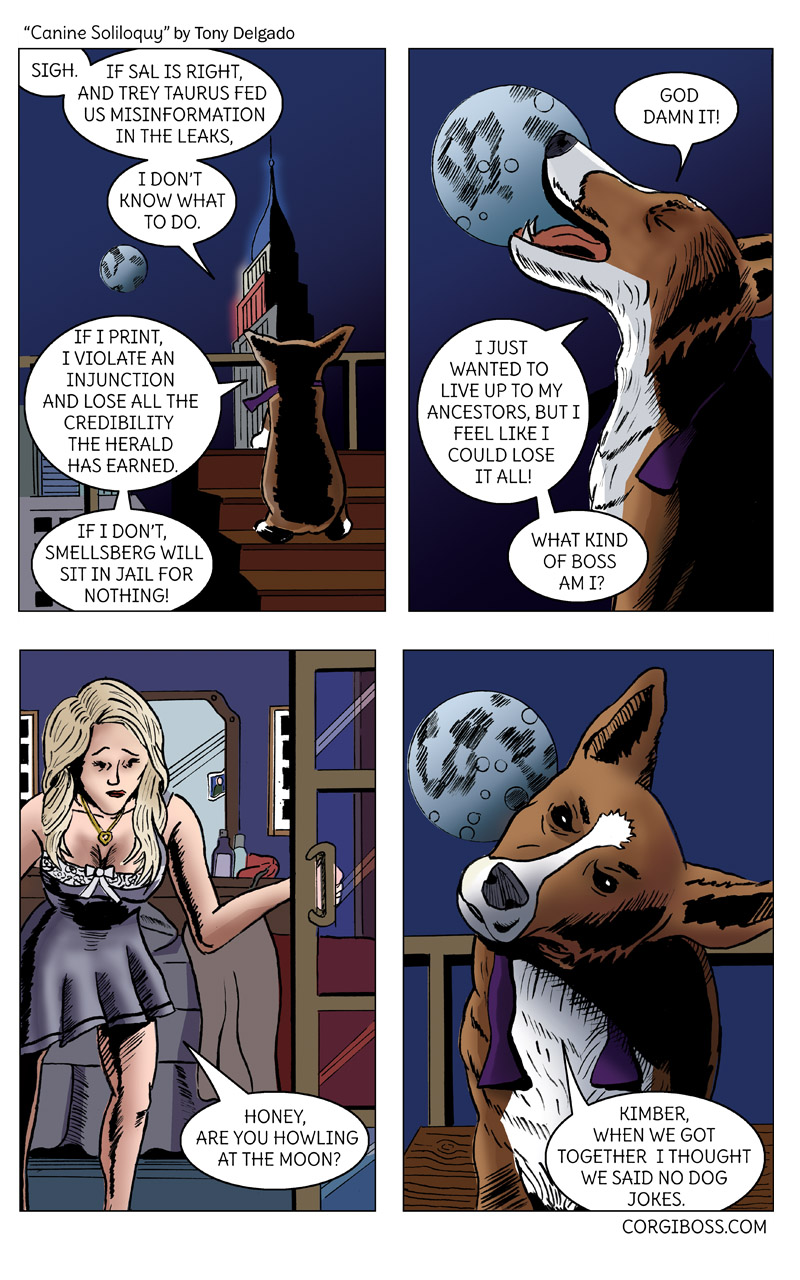 It’s pretty rare to see the boss off the clock like this in his fancy apartment in Hobarken. What’s even more rare is to see him filled with self-doubt about what to do next. I mean, as a boss, he usually knows how to boss people around. That’s his bossy role, right? So, it’s nice to see him step aside and show some interiority for the readers.

As we see in the comic though, long periods of self-reflection are often a luxury in the fast-paced world everyone inhabits. Sure, there is Twitter, Facebook, dog videos, and binge-worthy Netflix shows to help us avoid thinking about ourselves, but the biggest inhibitor of moments of quiet reflection are other people! Kimber comes out to see what the boss is doing, interrupting his ruminations. I guess it is pretty alarming for the neighbors to have a dog on a balcony screaming into the night.

However, he, and we, need our time alone with our thoughts, don’t we? Sure, it’s those times alone that allow crippling self-doubt to seep in. Sometimes it’s self-doubt and sometimes it’s your better judgement trying to signal you, like Nicolas Cage on Alcatraz island, before you make the wrong decision. It’s your mind’s time to figure things out. I’ve seen in the news lately, a lot of stories about people (mostly men) who probably should have spent some more time alone with their thoughts considering their actions before they took them. Louis C.K., Roy Moore, et al. Right?

Don’t forget! Your time in your head can also be the time for you to vent. This is precious. I think we all deserve some time to look to the sky and scream once in a while, right? In fact, right now I might just scream about…Oh wait, that’s my girlfriend calling me to watch Netflix. Maybe next time.

Trivia: The layout of the office at the Hobarken Herald used to have less of an open plan, with closed cubicles. This lasted until Mary protested the “divisiveness” in the newsroom, putting an axe through Frank Szymanski’s cubicle wall to chop it down. Who is Frank, you ask? He doesn’t work there anymore for some reason.