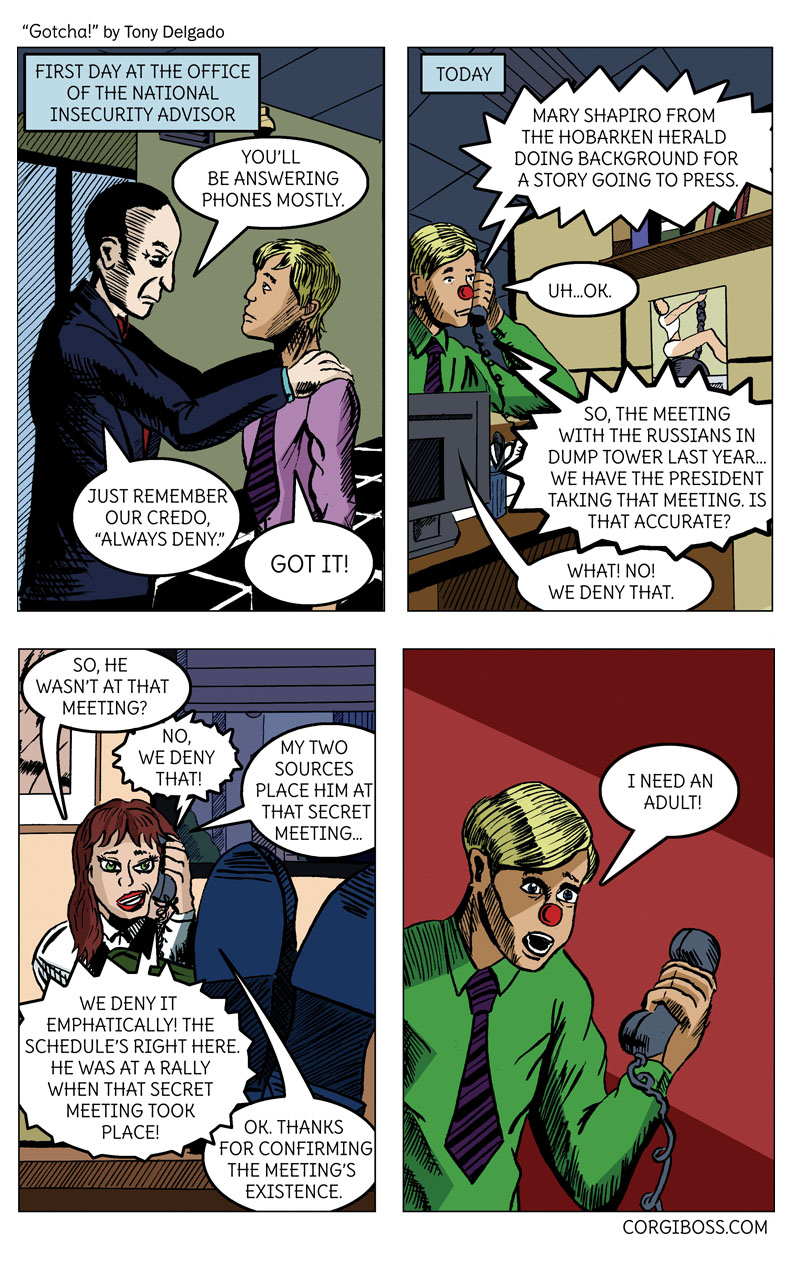 Opinion Page
Operator That Is Standing By Really Wishes He Could Sit
Posted September 19, 2017 at 12:01 am

Although this new guy works for National Insecurity Advisor Trey Taurus, a person some have described as looking “so evil,” you do have to feel bad for him. He doesn’t really have any stake in anything political, but he ends up being the victim of Mary’s shrewd misdirection. I have to imagine that his first day on the job, in the first panel, didn’t really consist of much more guidance that what we were seeing. If this is the case, how much can we blame him for being overwhelmed. We’ve seen in the past that Mary Shapiro can be a frightening individual. She’s definitely more than he would be able to tangle with!

Truthfully, I can tell you that I relate to the situation in which this character finds himself. I’ve had a number of jobs in my lifetime of which a key component of the work is just answering phones. If you haven’t done this type of work, you might be surprised to learn that more often than not, preparation for this job consists of little to no training whatsoever. Although, I won’t go as far to suggest that I received no training. They did show me how to turn on the headset so I can receive calls and how to mute the microphone so no one can hear me crying in my cubicle.

The odd part of working on the phone though is that since you’re a disembodied voice at the end of line someone calls for information, the customer expects you to be trained and knowledgeable. Weird, huh? They don’t know me! They have this foolish hope so ingrained that when they find out their interaction with the person on the line strays from this image they start to try to reinforce it by invoking “my training”—like this will jog my memory or give them a gotcha moment:

Customer: So, if I want to be entitled, I can return my purchase a month later, right?

Customer: –Wait. Based on your training, what has happened before?

Me: Training? (Scrambling to hit the mute button) Training! HAHAHAHAHAHA!

Customer: Wait a minute! You have no idea what you’re doing! It’s like they’ll let anyone work this minimum wage job!

Sometimes the lack of training is on purpose. The company wants customers to struggle with getting what they need. Remember when you’re all like: “I just want to cancel my service! Why doesn’t anyone know how to do anything?!” We know that’s not an accident, cable companies. Other times, it’s a payroll thing. It’s a lot of money to train someone. Instead, it’s a lot cheaper to just hope that staff figure it out or pester the supervisor. Either way, the point is that anyone on the front line of a toll- free number is probably drenched in sweat and a bad phone call away from wrapping the phone cord around their own neck. Try to be nice since they probably have no idea what they’re doing and have to pretend otherwise.

Trivia: The Boss once had a gotcha moment when he suspected a reporter was plagiarizing. Just like the last guy, the reporter denied it. So, the boss fired him for doing it again.