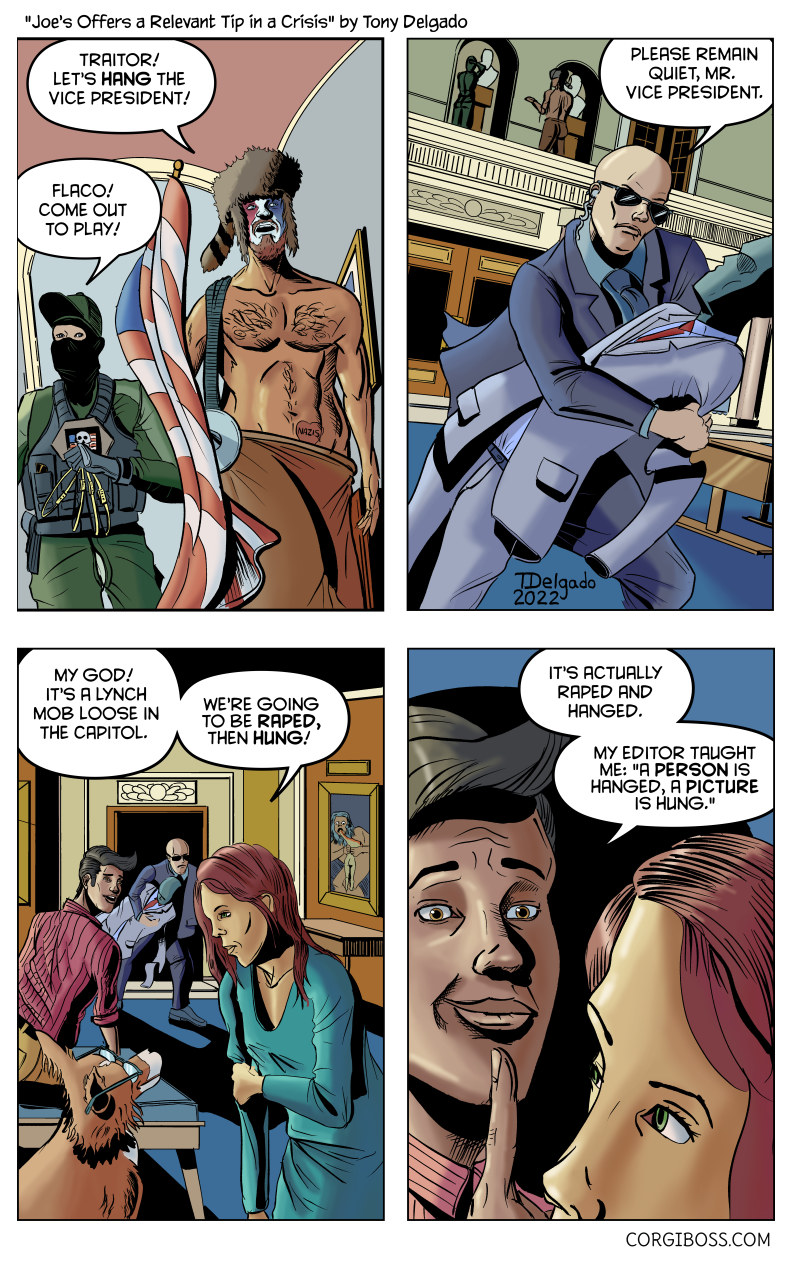 I hope you won’t think less of me if I admit that the whole “hanged vs hung” thing is something that I’ve been pedantic about in the past. It wasn’t under such extraordinary circumstances as being under direct threat of being hanged. I haven’t made anyone that angry yet (note: add it to the bucket list). My peevishness about the usage of hung likely originated from watching too many episodes of Masterpiece Theater featuring fancy-accented British soldiers telling “blackguards” that they’ll see them hanged” for flouting authority.

However, what we have in this strip, intruders threatening to hang the Vice President, is not nearly as romantic as a conflict in an adventure story like The Scarlet Pimpernel! Although there are striking similarities to The Terror, what’s playing out here is the culmination of Dump’s pressuring of his VP to not certify the election—something that some have called “legitimate political discourse”!

That said, there is a silver lining, maybe. When they threatened to lynch the VP, the office of the Vice President was given the most relevance I’ve seen in my lifetime. The future of American democracy, the legitimacy of an election, rested upon the shoulders of one of history’s greatest understudies. That’s publicity you can’t buy, and by doing nothing beyond what was expected of him, the VP showed more agency in that moment than he had in the entire four years of the administration!

Such critical inaction isn’t without a lot of pressure though. After all, there are reasons that VPs are the understudies and not the stars. Perhaps this is why I read that before January 6th our real-life analog of the VP called up another occupant of that same irrelevant government office, former Vice President Dan Quayle. He asked Quayle if he should deviate from the scripted role that was assigned to him. I’m sure Quayle regaled him with an anecdote about a time he did something unexpected of him, getting incorrectly pedantic about the spelling of “potato.”  At that point, Pence had to know the writing was on the wall, take it from one potatoe to another, he had to do his duty, which was basically nothing.

Maybe I’m wrong! This might be as exciting as an adventure novel!