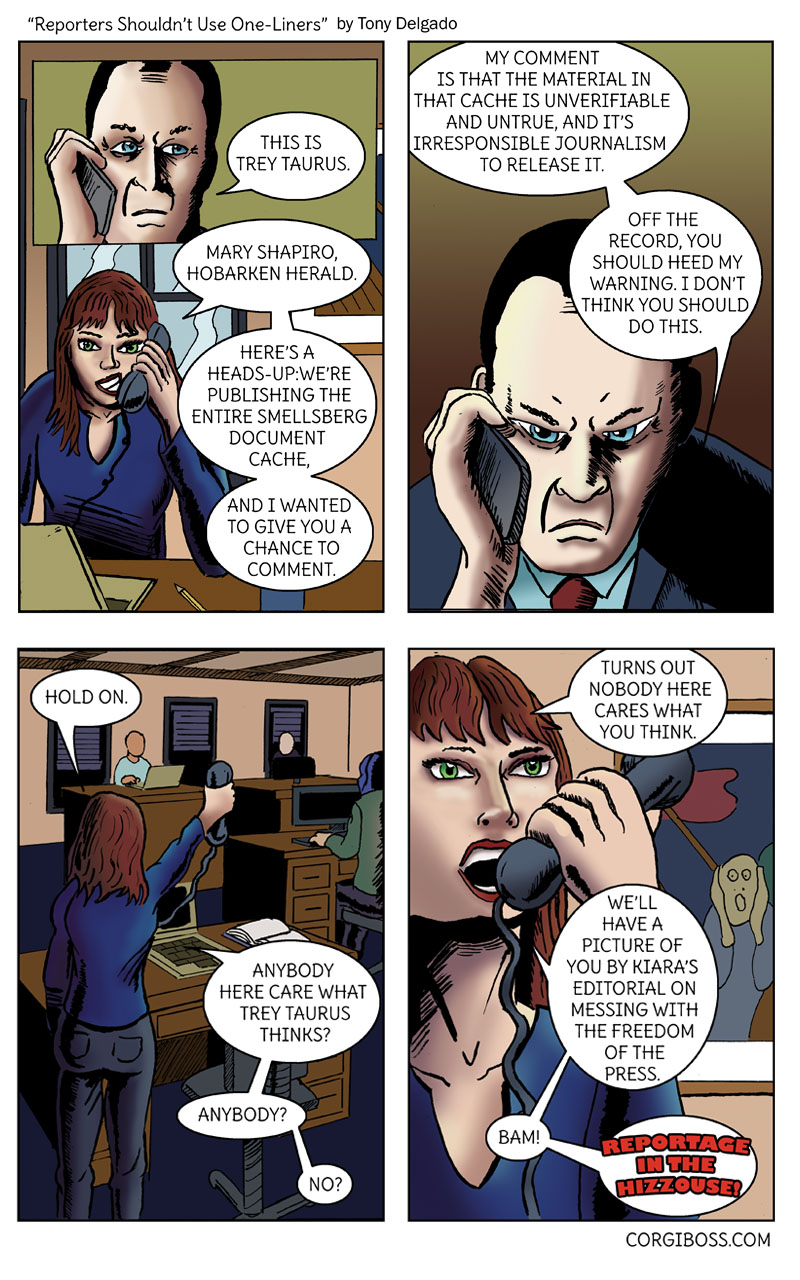 After reading this comic, I think we can all agree that Mary has demonstrated that she has perfected the art of the clapback. I mean she even has her own catchphrase! OK. Maybe not perfected, but somebody somewhere would give her points for her sarcasm even if she didn’t stick the landing of her clapback.

For the uninitiated, the clapback is the art of checking someone with a witty and cutting rejoinder. This is not to be confused with the crap-back, which involves free return shipping labels and a lack of decency. No, the clapback is certainly all the rage on social media. Nothing becomes trending faster on Twitter than when someone famous has an interaction with another person (even better if they’re famous as well), that is witty and/or fierce. It’s surprising that such antisocial behavior is so popular because initially social media was designed for us to find friends or follow each other’s thoughts and accomplishments, not to judge each other, right? Just kidding, it was so Harvard students could judge which of a pair of photos was more boneable.

All this being said, if you think I’m going to complain about the toxicity of clapback culture as being mean-spirited or bullying, I’m afraid you’ve come to the wrong place. I’m also not going to gripe that it turns almost every interaction into a set-up for a punch. I mean how monotonous can you get, doing constant set-ups and punches over and over and over again (by the way, this the 50th Corgi Boss strip. Congrats to me!!!!)?

No, the problem with clapback culture on social media is that it is incredibly democratizing. Everyone thinks that they have something witty or cutting to say. This is because all it takes is something that strikes a wide enough set of sass sensibilities and you could be the next viral sensation. Everyone could be really witty and clever. That sounds great, right? Well, it also means that so many—so so so many others—will miss the target of a good clapback. They will not being quite funny enough or just offensive or, worst of all, boring. These still-born clapbacks populate the responses of so many Tweets, because everything is a set-up looking for a punch in this world. Don’t believe me? Look at this. Does that need a clapback, really? Or just follow Piers Morgan on Twitter. Sad. Or treat yourself to the comedy stylings of Mike Huckabee. It’s like a open mic night at the improv, if that improv was in hell with a two-drink minimum of vinegar. The worst right?

Chin-checking is a little bit like deep-frying a turkey. You can do it if you have no idea what you’re doing—no one will stop you—but maybe you shouldn’t burn everybody’s house down for your moment of glory putting someone in their place. If you’re not sure if you can, maybe you should stick to that other important function of social media: having good conversations and vicariously enjoying other people’s interests. Failing that, just write a crass app about whether people are boneable or not.

Trivia: During Mary’s teenage summers, between the years she went to Chess Camp and Make-Out-with-Braces Camp, she attended Clapback Summer Academy for the Acerbically Gifted.