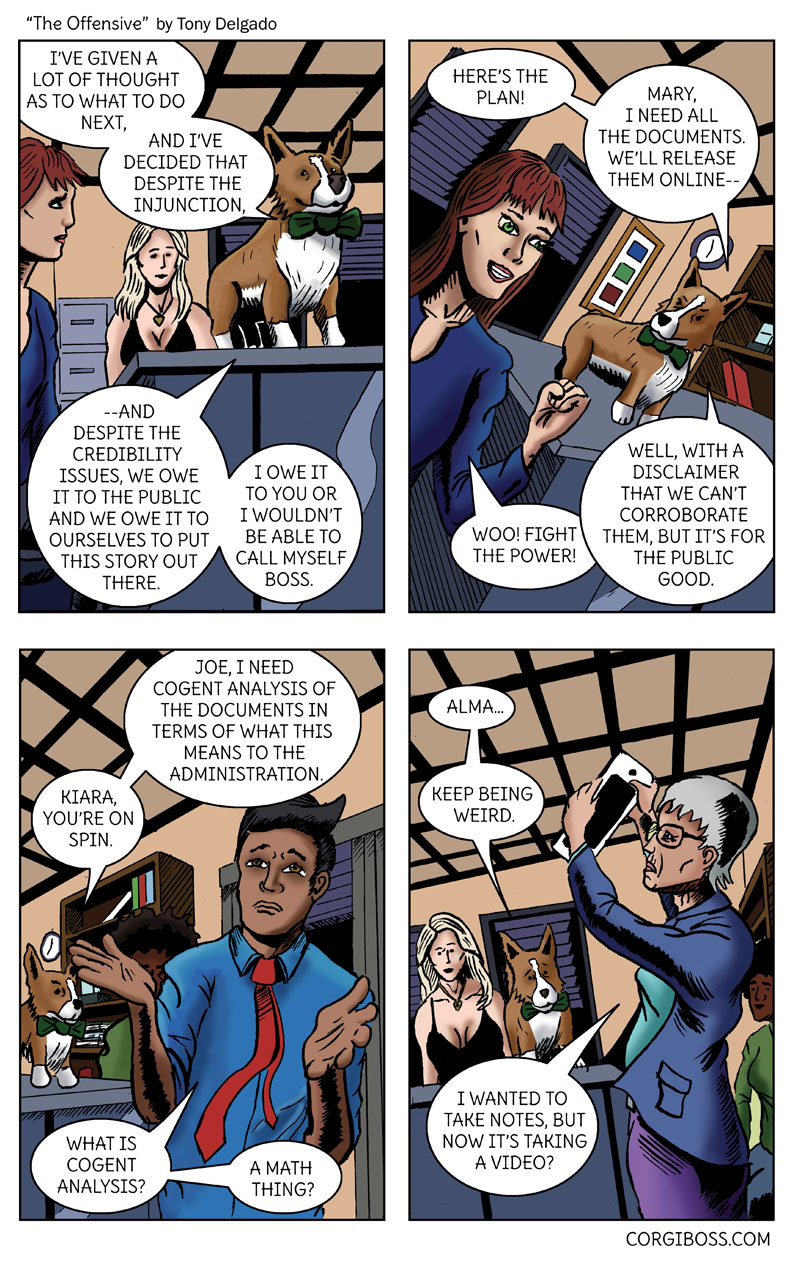 Opinion Page
Senate to Vote on Bill to Change Holiday Name From Thanksgiving to Thankstaking
Posted November 21, 2017 at 12:01 am

I hope you all are having an excellent Thanksgiving break. Please remember that Corgi Boss will return on Tuesday November 28!  Just as a heads-up: I’ll probably skip an update around Christmas as well since it’s the holidays. Why not celebrate, right?

However, in the comic, they aren’t celebrating, they’re rallying for an offensive against the President Dumpster-Fire and Trey Taurus. I guess the boss believes that what he is doing is the right thing, but we’ll have to see how that turns out.

That said, I’m not certain about the Boss’s decision to go out on a limb and publish unverified documents. In the real world, decisions like this have yielded mixed results.

For example, Buzzfeed’s choice to release Christopher Steele’s unverified dossier, the one that raised the possibility of the pee-tape (look it up) has not really yielded any tangible effect upon this administration. However, it has greatly increased the number of people in the world who have said, “Holy shit! Buzzfeed does News? There’s…like…longform articles on here. What is happening?” People have also been saying as a result of the publication, “Christopher Steele sounds like a fake name for a secret agent, but maybe if that were actually my name, I’d have to become a secret agent. So I guess it’s real.”

In the case of Hillary Clinton’s adulterated State Department emails, known colloquially as “but the emails,” it pretty much helped hand Trump the election. This all happened despite evidence that the emails selectively omitted things and were, like diarrhea on a first date, timed for maximum impact. That’s pretty significant, but even now the narrative around “but the emails” is still a mess! There something about uranium that is hard to follow definitively. Something about risotto? Who knows? However, the problem with their seedy connections with Wikileaks (and *cough* Russia) now hangs over the admin like a PR albatross. It’s certainly changed everyone’s views on Assange as well. Before he was a fighter against injustice who probably raped someone. Now, he’s a scheming electoral saboteur who probably raped someone. So, who knows how this will all turn out?

However, for now, let’s retreat back to the world of fiction where things are less scary to us, but no less dicey for the characters. Let’s hope things turn out OK with the boss’s decision. We wouldn’t want him to be forced to hide in a tiny Ecuadorian embassy room while dating Pamela Anderson. Man, I wish I could put stuff like that in my comic, but it would be too unbelievable. See you on Tuesday.

Trivia: For Thanksgiving, Kimber’s family, the Hellton’s like to take a moment to think about what they’re truly thankful for, a good corporate lawyer and a bank account in the Cayman’s