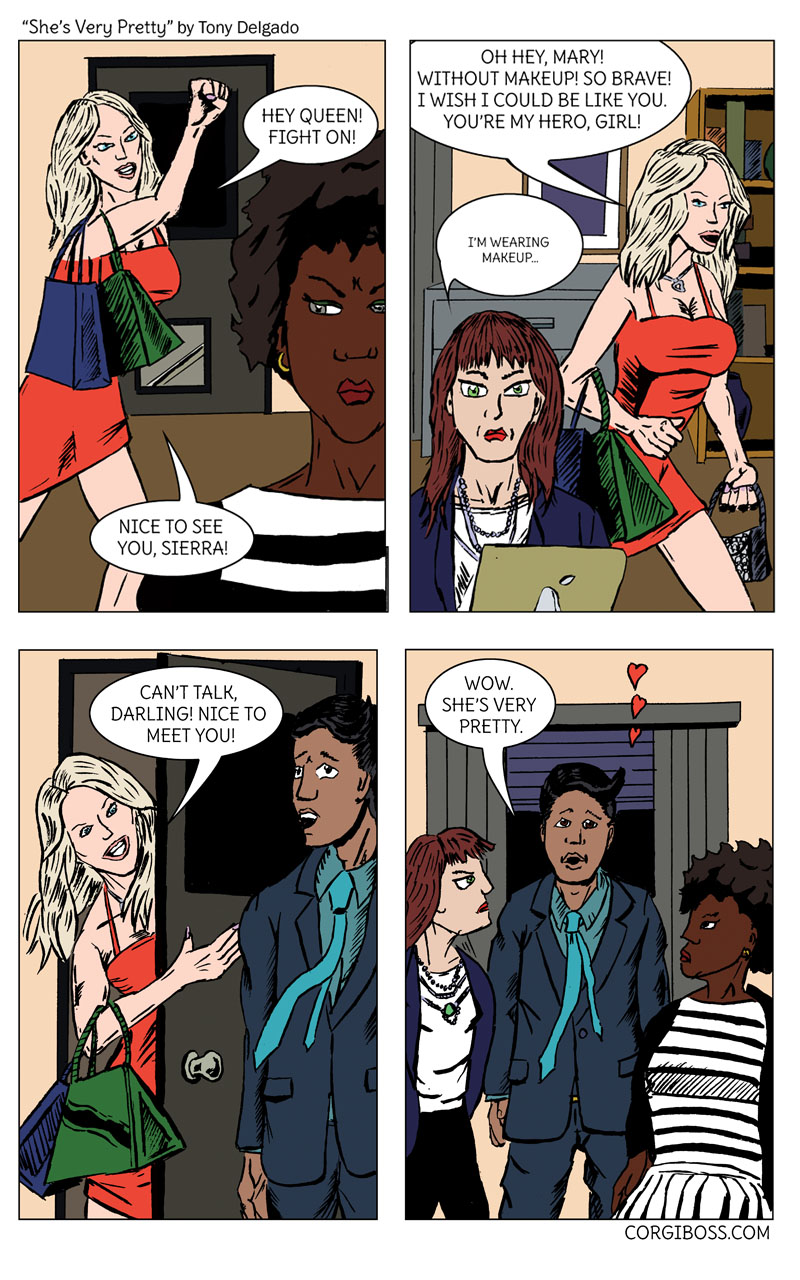 Opinion Page
Microaggression is a Superpower: How to Lose Friends and Influence People.
Posted July 18, 2017 at 12:01 am

Microaggression! With all the attention that’s been given to gaslighting lately, it might be time to turn attention back to its close cousin, microaggression. That’s what we’re seeing from the woman in this comic here. Although, the two actions have a lot of the same characteristics. They’re like muffins and cupcakes, if those cupcakes make you angry at the world and the muffins convince you that you’re going insane. Talk about the worst bakery ever, right?

Remember, a microaggression is when someone does or says something that’s a small thing, and it really sticks in your craw. Then you think, “hmm, am I being too sensitive? They probably didn’t mean anything.” This is complicated because these aggressions can be unconscious!

Gaslighting is similar. It’s when someone does something or changes something, but acts like you are crazy for noticing the inconsistency.  This second part is the most important.

These manipulations are like superpowers that villains can employ.  There is a reason that the super villains that can cause the most damage are the ones who mindfuck the heroes. You can know about the powers too and they can still affect you.

The Sinkhole of Paranoia

The problem with knowing about microaggressions is because it makes you more paranoid, not less. It’s like that movie, Inception. The ones most worried about being trapped in a dream are the ones who know that’s a possibility. Here’s an example from the most important life, mine:

Often, I go with my girlfriend to the burger and shake place down the road from our apartment. We’ll grab milkshakes. She’ll get vanilla and I’ll order strawberry. We wait for the staff to make it and bring it to us. When they do, they invariably give me the vanilla instead of the strawberry. It’s fine, but I think every time, “Do I seem like a vanilla milkshake guy?” They’re like, “he thinks he’s a strawberry, but naw—DENIED!” I give into paranoia. I mean, what are they trying to say? This seems like a rhetorical question. It’s not. Please e-mail me and let me know.

How do we beat microaggressions? You can surround yourself with people that are always nice to you. However, if you’re like me and you can’t imagine anyone being nice to you, there needs to be another option. You could treat any microaggression as a teachable moment: “Now, Jane when you tell me I’m too light-skinned to actually be my ethnicity, it bothers me.” That’s for healthy people who talk about their feelings. They’ll never do anything interesting with their life or be creative. The third and best option is, as we talked about last week—a feud. However, a specific type of feud:  full on Count of Monte Cristo. I don’t want to say anything specific but the employees of that burger place may wake up to find themselves under a new owner. Then they may stop offering vanilla milkshakes as a policy. Then the place may be burned down for the insurance money.

Please don’t forget that I need your help. If you support revenge please vote for Corgi Boss on Top Web Comics by clicking here and go through the vote gateway.