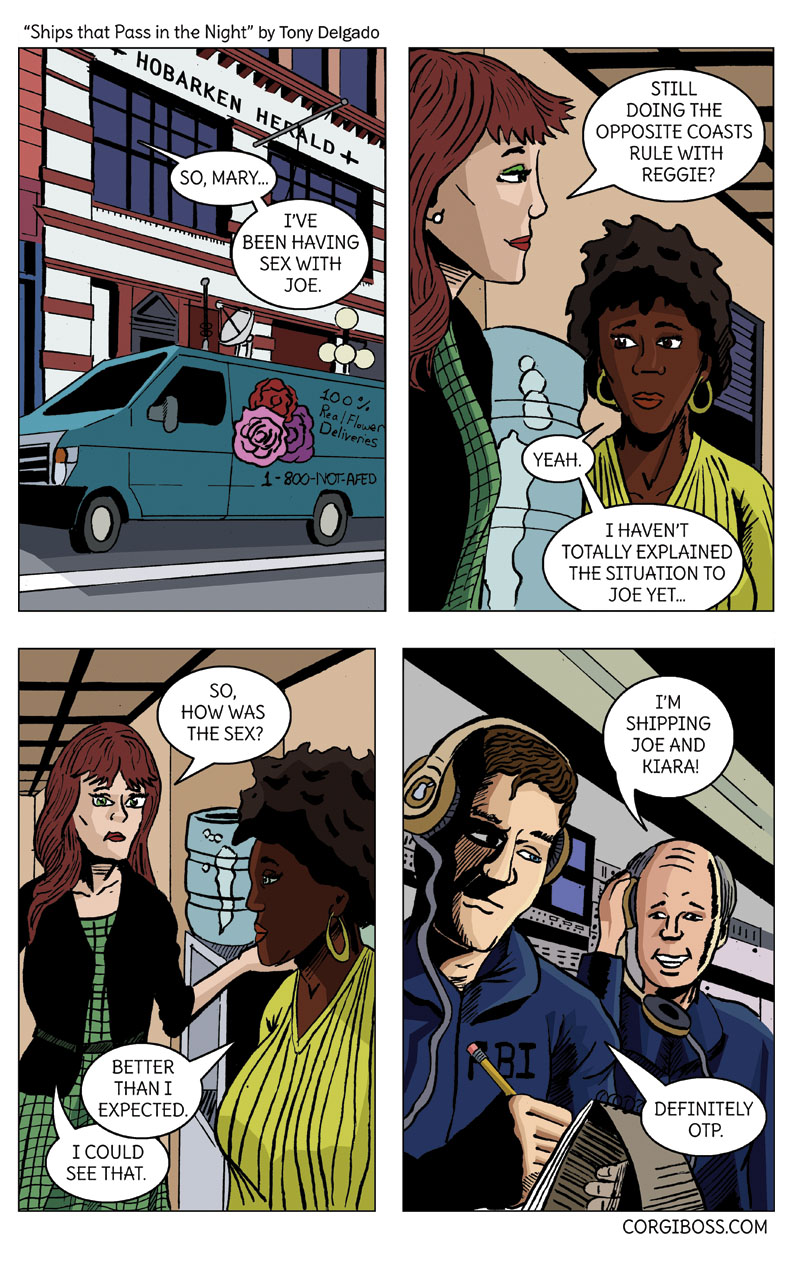 Maybe those FBI agents are getting a little too close to the subjects of their surveillance. I doubt that they are there to follow Kiara and Joe’s romance, are they? Whatever the reason, I guess they’re sucked in.

If you didn’t know, “shipping” is phenomenon through which (overly?) obsessed consumers of media (tv shows or stories for example) root for romantic pairings between characters. Related to that is the idea of “OTP” or One True Pair, basically what someone thinks the ideal couple would be.

Here’s an example. Recently, the new hotness in medialand has been the second season of Netflix’s Stranger Things. Part of the dramatic tension of the show centers around whether or not Nancy Wheeler will end up with jock Steve Harrington or loner punk Jonathan Byers. If you’re like me you’re on team Steve because you feel like good hair makes a true pair. Other people feel that Jonathan and Nancy belong together because he…like…listens to her or some shit. What’s that? Overrated. And my girlfriend weirdly thinks Steve and Jonathan will just forget about Nancy and hook up with each other. Don’t listen to her. Not gonna happen.

Anyway, shipping seems a little bit like voyeurism, but in fact I think it’s more like horseracing. Just like when you’re deciding who is going to win, place, or show, you have to think about all the relevant factors when shipping. What’s the health and temperament of the contenders? Are they calm? Sad? Heartbroken? Possessed by a demon? How is the environment? Is it a soft turf? Is this a good place for the contest? A lot of negative vibes? Of course, you can account for all the relevant factors and then a surprise ship will happen. Maybe two people just meet at the airport and hit it off?

Trivia: If you were to bet on who was the best at coupling at the Hobarken Herald, it would be Alma. She’s been in three serious relationships with three women, and outlived the first two! Not foul play or anything. She’s just that old.