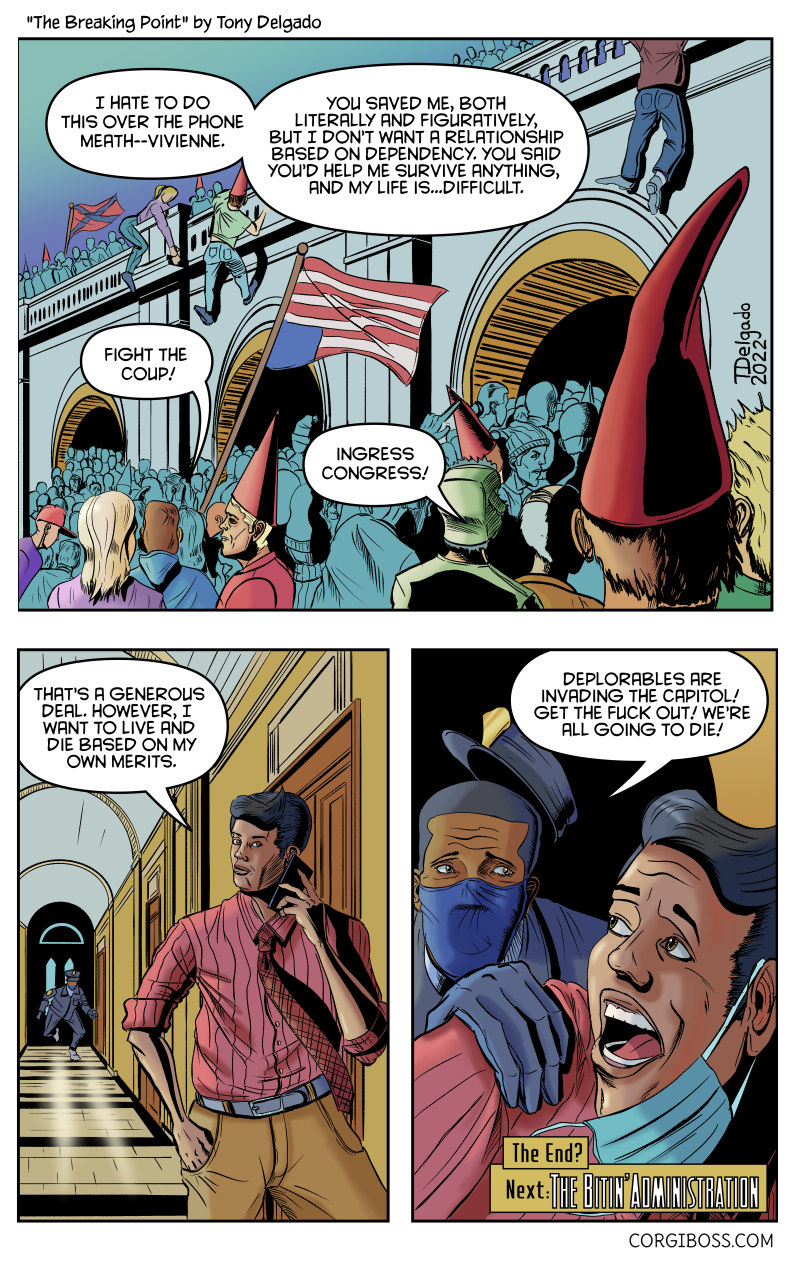 HOBARKEN (Corgi Press) — Joe’s looking pretty cool and confident in that second panel. It seems like he’s grown some in this story arc, getting to the point where he realizes he shouldn’t just be with someone only because they make up for his deficiencies. To do otherwise is to become a relationship vampire, and a vampire in a relationship isn’t cool unless you’re in Twilight. Vivienne is a cool character (perhaps too cool for Joe), but if the love isn’t there, what can you do? Also, the pair doesn’t really seem like they have a lot in common other than that Vivienne likes projects, and Joe is a project. I mean, we don’t even know if the sex was any good because all we’ve seen is Joe’s imagining. We know he’s not that capable--come on. Nonetheless, this is better than the way his previous relationships have ended.

That said, Joe should have been a bit more cautious in feeling too good about himself. As I’ve said before, being a pessimist, I always expect the other shoe to drop when I’m feeling like I’m in a good place. I bet those who advocated for the Enlightenment in France were pretty smug before the Reign of Terror. Julius Caesar probably woke up that morning thinking he had really figured some shit out. 90-something stabs later, we usually realize we were a little too full of ourselves.


With this strip, we end on a cliffhanger. What will happen to Joe Flaco? While I can’t imagine the sheer terror that those that were in the Capitol felt during the riots last year, it was a weird experience to watch it unfold on television and on the internet. It’s obviously rhetorically productive for some to call it an insurrection, but it really felt like something else—perhaps a failure. It wasn’t democracy dying, but it sighing. Even though it was literally an attack in which people were fighting and breaking down doors, it felt less like an attack and more as if the United States’ elections had become the Fyre festival. Remembering it, I can’t help but think of a bunch of deplorable buffoons milling in and out of the capitol, desperately using their bulletproof vests to try to contain their beer guts.


It was dumb, and I promise more dumbness next week when we start up the next story arc, “The Bitin’ Administration.” See you then.