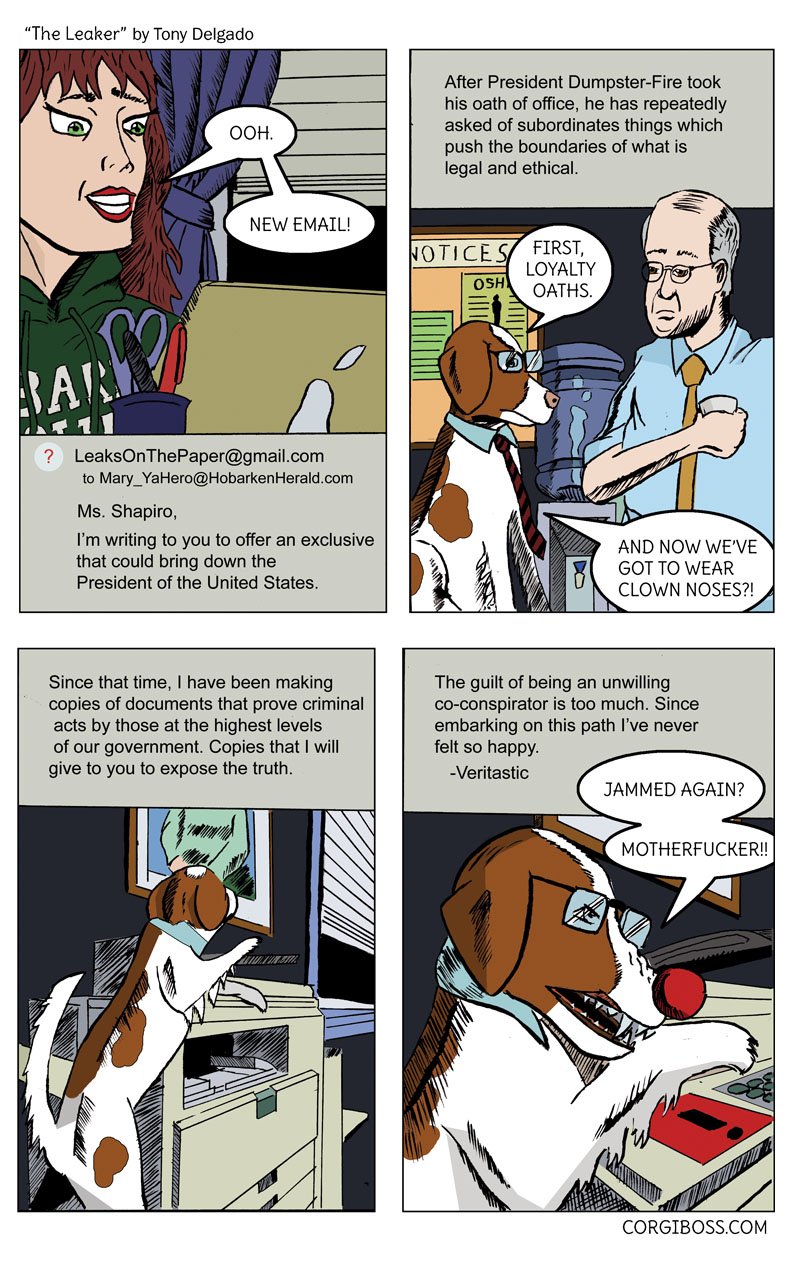 This latest comic is the start of the Corgi Boss’s inaugural storyline, relating to a leaker within President Dumpster-Fire’s administration. For now, I think that I will keep the leaker’s name a secret. Although, I promise that his name will not be as weird as Reality Winner, it will be an odd pun. Stay tuned to find out later in the storyline!

There has been a lot of attention given lately to leakers in the press. Reporters have said that the Trump White House is the leakiest one that they’ve seen in a long while, and they’re not just talking about the pee tapes. Everyone is leaking information on everyone else. Often, this is done by one faction within the government against another. Other times, it is as in this comic, someone within the government who feels that the public needs to be made aware of some wrongdoing.

Why do we Leak?

These are all very elevated reasons to leak information to the press—wanting to take power from another faction or righting injustice. However, I have a very low opinion of humanity, so I think people probably have pettier reasons for coughing up government secrets to the media. I don’t really know anything about the psychology of bureaucrats with loose lips, but I will use that lack of information to share some classic scenarios in which those secrets fly free:

The Dead Drop: Movies tell me that people die in public all the time. Car chases, shootouts, heart and alien attacks. My personal rule is that if someone drops dead in front of me, I call dibs on their stuff. If its valuable it’ll get out. If not, it goes in my serial killer “trophy” room.

The Same Name Game: Trump’s lawyer is named Ty Cobb. Just who the fuck am I talking to?

Heir Mail: The leaker doesn’t even work for the government, but Mom or Dad does. Maybe they shouldn’t take their work home. Maybe they should’ve gone to more recitals… After the FBI leaves, it’s Risky Business time.

Online Insecure Drop: There are a lot of parody accounts out there and typing accurately is hard. Just saying.

Tweet it Out of Him: Just pissed off on Twitter? Later will be called “I was hacked!”

Trivia: The Hobarken Herald has an extensive process in place to prevent leaks that each new employee must learn upon hire. The boss calls this “Paper Training.”