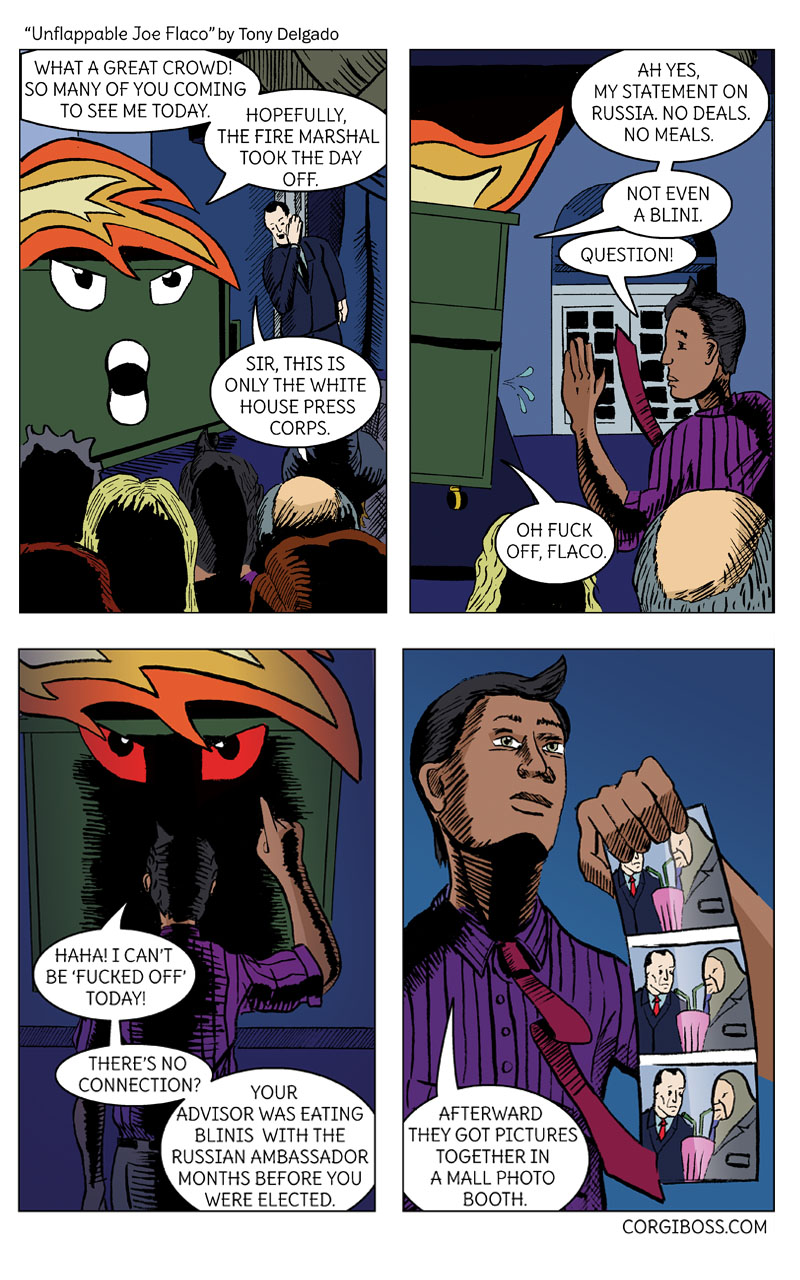 This comic might represent a turning point for Joe Flaco if he wasn’t ceaselessly buffeted around by circumstance like a plastic bag on a windy day…so beautiful…I feel like I can’t take it.  Nonetheless, he is still a lot different from the Joe Flaco that everyone met in the first Corgi Boss strip. Here he actually seems…competent. I’m mildly envious. This strip also might be a turning point for the storyline. I think people like turning points because it’s when all the pressure of what’s come before culminates and lights the way for what follows. When I first started writing this story arc, I divided it into four acts with this comic strip ending the first act. It’s nice that this act ends with Joe feeling a bit of triumph. He’s had enough of a rough time that he deserves a good day.

Can’t Be Fucked Off Today

It’s those days of triumph that are worth living for, right? Looking at Twitter, I feel like a lot of people are hoping to live through it vicariously when it comes to the current White House. I mean, something’s got to stick, right? Right? RIGHT?!!!

A lot of the real press conferences that I’ve seen are orchestrated by the participants, both in the administration and in the press, to be clapback moments like in this comic. We want a moment in which someone stands up and sticks it to whoever the bad guy is. Real triumph over the big bad isn’t just about culpability or winning, it’s about saying to your enemy, “You can’t shrug this one off. This is my can’t be fucked off day, buddy.”

It’s a bit of a fiction though because these moments, these days that we’re just on top of it, they don’t happen in a vacuum. As I said in the last paragraph (in case you’re one of those skimming readers—stop it), these moments are about transition but are entirely dependent on what came before and what follows. Even Joe’s moment only happened because of Mary’s stalwart reporting. So, it’s best not to hope for the smoking gun or dramatic gestures. They feel nice, but they’re hardly the whole ball game.

The Underside of the High Point

The sad truth of a zenith is that they often presage a decline, because as Kanye says, “can we get much higher?” The answer at some point will be no. No, Kanye, and no Joe Flaco, you can’t get much higher. So, I hope you are as interested as I am to see what happens with the Hobarken Herald as things get real.

Trivia: The high point of The Hobarken Herald’s circulation was when the International Bird Cage Lining Festival was in town.